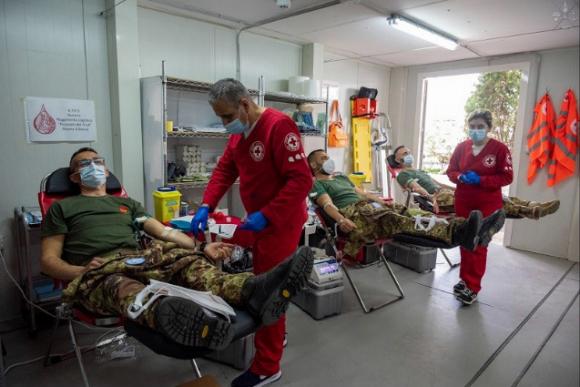 Respond to the urgent need for blood and blood products to increase their availability in the hospitals of southern Lebanon. This is the appeal to which the Italian Blue Helmets have responded by organizing at the Millevoi base in Shama, headquarters of the command West Sector of UNIFIL, an extraordinary blood donation in collaboration with the Lebanese Red Cross.

The donation, organized in full compliance with the regulations against the spread of Covid-19, was made at the contingent's infirmary, where, in the two dedicated days, 130 donors responded to the appeal launched by the Red Cross.

"We wanted to respond promptly to the request from the Lebanese Red Cross, to meet the lack of blood in local hospitals" said the commander of the Sector West of UNIFIL, Brigadier General Massimiliano Stecca, also among the donors "... especially in this period of Ramadan which, for various reasons, sees the need to increase the blood supply." continued the commander of the Italian contingent.

The donation campaign is one of the many projects that the West Sector UNIFIL carries out in all areas, from CIMIC to that relating to the gender perspective, in support of the local population, as sanctioned by the United Nations Resolution 1701.

In the presence of the air squad general Nicola Lanza de Cristoforis, deputy commander of the Operational Command of ...
504
Read

It took place on the afternoon of last Saturday, June 18, at the multipurpose hall of 'Camp Singara', the base that ...
244
Read

On 19 May, the European Multi Mission Frigate Carlo Bergamini received a distress call from the ...
847
Read