Home News armed forces Missions Lebanon: change at the helm of the contingent ...

Lebanon: change at the helm of the Italian contingent 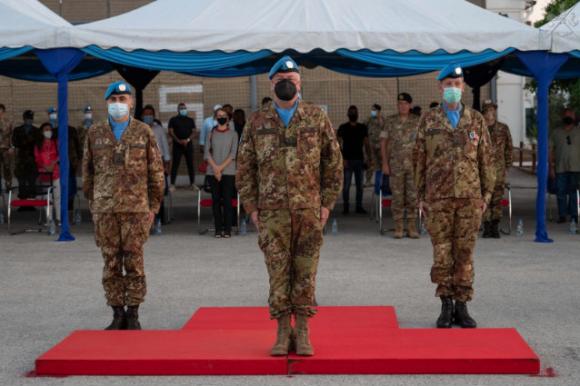 The "Taurinense" alpine brigade yesterday handed over the command of the Italian contingent in Lebanon to the "Friuli" aircraft brigade as part of the UNIFIL mission, the United Nations interposition force deployed in southern Lebanon.

In the presence of the Italian ambassador to Lebanon Nicoletta Bombardiere and the main local civil and military authorities, with a brief ceremony presided over by the head of mission and commander of UNIFIL division general Stefano Del Col, Brigadier General Davide Scalabrin handed over the flag of the United Nations at the parigrade Stefano Lagorio.

During his speech, General Del Col thanked the Alpini and the dragoons of the "Taurinense" for the "Great work carried out in this semester, during which the Brigade was able to effectively reshape the various operational activities, both in support of the Lebanese Armed Forces (LAF), and in the delicate monitoring of the ceasefire between Lebanon and Israel, even during the difficult moments of crisis and instability in the entire Middle Eastern area ".

To achieve the objectives of UN Security Council resolution 1701, the Italian peacekeepers "They have always known how to act with impartiality and transparency, establishing relationships of esteem and respect with LAF colleagues and constantly gaining the unanimous consent of the institutions and the local population, also through the implementation of targeted civil-military cooperation projects".

In fact, support activities for the weakest segments of the population have been made more consistent with the criticalities caused first by the health emergency from Covid-19, and subsequently by the deterioration of the socio-economic fabric of the country.

During his mandate, the close coordination between the CIMIC cell (Military Civil Cooperation), the veterinary officer, the Gender and Medical Advisor and the component of Public Information, has made it possible to develop projects aimed at self-sustainability building, such as the realization of female entrepreneurship courses or the construction of eco-sustainable and self-sufficient agricultural areas, thus effectively supporting the microeconomics in the area of ​​responsibility and allowing the development of effective communication campaigns in the territory to increase the chances of identifying new realities 'with which to replicate the pilot projects.

General Del Col then addressed the men and women from “Friuli”, exhorting them to "To continue in the footsteps traced by the previous contingents, operating with balance, professionalism, impartiality, diplomacy, effectiveness, credibility and respect."

The "Friuli" aircraft brigade, on its fourth mission in Lebanon with the colors of the United Nations, assumes command of the West sector of Unifil in which 3.800 Blue Helmets operate from 16 of the 46 contributing countries to the Unifil mission, which includes 1.000 Italian soldiers .

In the presence of the air squad general Nicola Lanza de Cristoforis, deputy commander of the Operational Command of ...
825
Read

On 19 May, the European Multi Mission Frigate Carlo Bergamini received a distress call from the ...
1045
Read