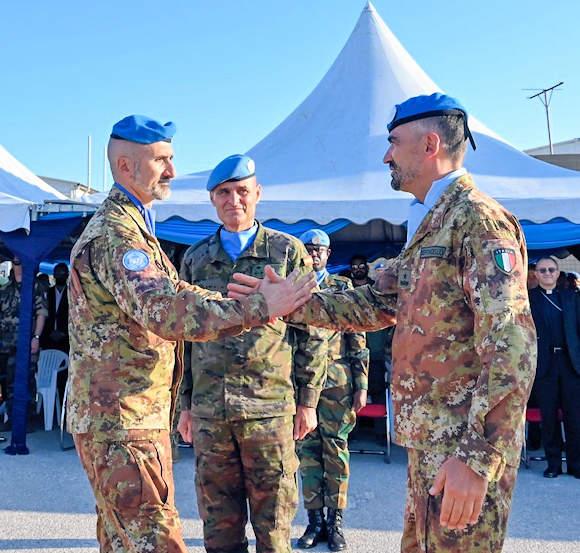 It took place yesterday in the Italian Headquarters of Shama, named after Lieutenant Andrea Millevoi (MOVM), in the presence of Major General Aroldo Lazaro Sàenz, force commander (FC) e head of mission (HoM) of the UNIFIL mission, the ceremony that decreed the change at the top of the Italian contingent included in the United Nation Interim Force in Lebanon (UNIFIL).

The ceremony was attended by Division Admiral Valter Zappellini, Chief of Staff of the Interoperable Summit Operations Command (COVI), the ambassador of Italy to Lebanon, if Nicoletta Bombardiere, and the highest civil, military and religious authorities of southern Lebanon.

General Lazaro, after greeting the civil, military and religious authorities who intervened, took the opportunity to thank Italy and all the contributing countries for their continued support for the West Sector and in general to all UNIFIL, specifically he wanted to praise the peacekeepers of "Leonte XXXI" for having contributed with professionalism to the pursuit of the mission in support of the Lebanese government and its Armed Forces in exercising sovereignty in southern Lebanon. Finally, he thanked Brigadier General Massimiliano Stecca, for his enthusiasm, skill, leadership and deep understanding of the local environment, which allowed the peacekeepers of West Sector to perform in an exemplary way all the tasks assigned, for the benefit of UNIFIL and this country.

“… Since the first day I have felt at home, I have always been welcomed with warmth and with big smiles - General Stecca said in his final speech -  … The mission in Lebanon is not just a question of how many patrols are conducted, how many kilometers are traveled or how many projects are inaugurated; it is not even a matter of the colors of our berets or flags, Lebanon is a matter of emotions and it is a matter of people - continued the commander of the West Sector by UNIFIL - ... I thank everyone starting with the force commander who has always trusted me, I thank all the civil, military and religious authorities for the support given to all the initiatives I have proposed and finally allow me to thank my Blue Helmets, women and men who they served for peace under my leadership…. it was an honor to be your commander… thank you! "

During the mandate, pursuant to United Nations Resolution 1701, the Blue Helmets belonging to the “Pozzuolo del Friuli” cavalry brigade conducted about 2.500 patrol activities on foot and on board vehicles, day and night; of these, over 16% were carried out in close synergy with the Lebanese Armed Forces (THE F). In addition, 200 control activities were developed on the ground in sensitive areas and more than 4.000 stocks and observation posts, both temporary and permanent, in order to monitor compliance with the ceasefire in the assigned area of ​​operations, between the Litani river. to the north and the Blue Line to the south, the dividing line between the Lebanese and Israeli territories.

Of particular mention was the increase in activities close land air monitoring (CLAM) Helipatrols, operational activities that see the coordination between the motorized patrols on the ground and the personnel of the same unit embarked on AB 212 helicopters belonging to the ITALAIR Task Force. The aim was to increase the capacity of UNIFIL's Western Sector to monitor and supervise the most critical areas between Lebanon and Israel, the "sensitive areas" present in the areas of operations to prevent any tensions between the two states and events that could undermine the current ceasefire.

As part of the support to local Authorities and the civilian population, about 450 Civil-Military Cooperation (CIMIC) and Gender (GENDER) activities were completed in the entire sector of competence, including: medical assistance, courses training, donations, inaugurations and monitoring of projects, events in favor of small businesses and meetings / meetings with civil, military and religious authorities. These activities have been fundamental for maintaining and improving the relations of trust, mutual trust and credibility of the UNIFIL Mission. The main activities carried out include the donation of numerous photovoltaic systems, events in favor of small businesses ("International woman day market" and "Sector West Summer Market") and events aimed at local artists ("Art Exhibition") organized and hosted at the internship of the Italian base and medical and food training courses. Also of importance was the contribution to the organization of the half marathon of Tire, which saw the Italian contingent host the presentation press conference in the base of Shama and contribute to the conduct of the event with means, materials and specialized personnel, as well as with a large participation. of runners.

The joint training with the Lebanese Armed Forces (LAF), which has led to a constant improvement of the procedures of command and control (C2), with specific reference to the sharing of information and communications, strengthening the coordination of technical-tactical procedures and familiarization in the use of the means and materials supplied, implementing the synergy within the United Nations Interim Force in Lebanon (UNIFIL ).

During the mission the Framework Agreement, framework agreement that officially sanctioned the beginning of the collaboration between the Joint Task Force Lebanon Sector West (JTF-L SW) and the Association of the Order of Malta Lebanon, which aims to strengthen humanitarian cooperation, in respect for dignity and in order to meet the needs of vulnerable people living in southern Lebanon specifically in 5 areas: medical assistance, social assistance, agro-humanitarian and in the near future in education and alternative energies.

The sixth term in the Land of the Cedars of the "Pozzuolo del Friuli" cavalry brigade under the command of the Joint Task Force - Lebanon ended with today's ceremony. Sector West and the Italian contingent and the third mandate of the “Aosta” mechanized brigade has begun.

In the Italian mission in Lebanon called LEONTE, the Italian Contingent is responsible for the Western Sector of UNIFIL in which 3800 UN peacekeepers operate from 15 of the 46 contributing countries to the UN mission and which includes about 1.000 Italian soldiers.

The activities carried out in the Operational Theater are conducted under the coordination and according to the directives given by the Operational Command of Vertice Interforze (COVI), led by the Army Corps General Francesco Paolo Figliuolo.

The Aerial Shield exercise has just been held at the RC-W Camp Villaggio Italia, dedicated to the defense of Counter ...
150
Read

The units of the Regional Command West, framed under the Piedmont Cavalry regiment (2nd) of the Army ...
5791
Read

Nave Thaon di Revel, the last ship delivered to the Navy, left on 12 August from the port of La Spezia to ...
2379
Read

In the afternoon of August 8, an anti-piracy and Maritime exercise took place in the waters of the Gulf of Aden ...
828
Read