Home News armed forces Missions Lebanon: change in the direction of the CAI 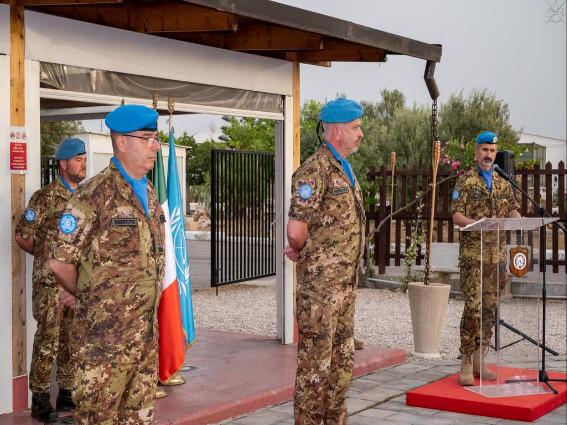 It took place in the Shama Base, the headquarters of the command Sector West of UNIFIL and the Italian Contingent in Lebanon, the transfer of responsibility of the management of the Administrative Administration Center (CAI) between Colonel Giuseppe Tempesta, outgoing director, and Colonel Fabrizio Borreani, incoming director.

The sober military ceremony took place in the presence of the commander of the Sector West, Brigadier General Massimiliano Stecca, the president of the Municipality of Tire Hassan Dbouk and the mayor of Shama, Abdul Qader Safiyeddine, as well as the honorary consul of Italy in Tire, Ahmad Seklaoui and other Lebanese civil and military authorities.

The Administrative Center of Intendency carries out a delicate task of direction and coordination of the logistical-administrative activities of the organic units involved in the “Leonte” Operation.

The activities carried out range from UN reimbursements, a peculiarity of UN missions, to contractual and financial activities, in which timing and correctness are fundamental premises. CAI also supports the Italy-Lebanon bilateral mission (MIBIL).

The Italian mission in Lebanon is currently led by the “Pozzuolo del Friuli 'cavalry brigade, in its sixth term in the“ Land of the cedars ”with the colors of the United Nations, with the responsibility of West Sector of Unifil in which 3.800 “blue helmets” operate from 16 of the 46 contributing countries to the UN mission and of which 1.000 Italian soldiers are part of.

The frigate Carlo Bergamini returned to Taranto on 2 July at the end of a long period of assignment ...
226
Read