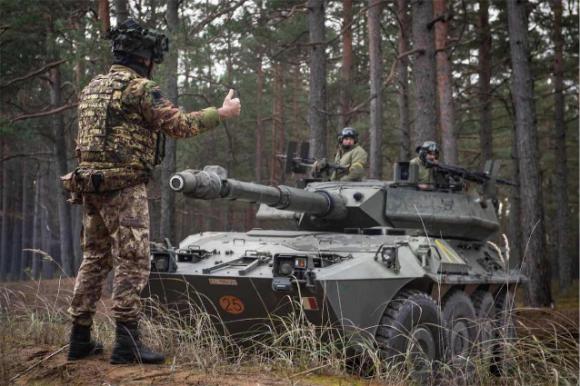 In recent days, the multinational exercises called Iron Spear e Furious Ax which saw the soldiers of the Italian contingent on a mission to Latvia, as part of the initiative enhanced Forward Presence of NATO, deploy and operate side by side with colleagues from the armies of the Allied countries participating in the Operation Baltic Guardian.

The exercise Iron Spear it was conducted with the intent of demonstrating the strength, lethality and united effort of the battle groups deployed in the Baltic States and Poland, through the combined use of combat tanks and infantry fighting vehicles. The main objective was, once again, to prove the high mobility, the ability to project forces and integration.

Conducting activities aimed at making the training objectives of the Estonian mechanized brigade, deployed for the occasion in Latvia, was instead the purpose of the exercise Furious Ax conducted in opposing parties.

This last activity was the first employment opportunity that involved the ISR (Intelligence Surveillance Reconnaissance) platoon of the "Lancieri di Novara" (5th) regiment based in Codroipo (Pordenone). The latter, who arrived in the Operational Theater only on October 14th, was already deployed on the ground with his heavy exploration assets, on busways on October 19th. Centaur, and light, on VTLM Lynx.

Italy is a responsible member of the Atlantic Alliance and, as such, honors and shares the commitments that stem from that membership. In this sense, NATO remains an indispensable source of stability and security.

The eFP is a clear demonstration, on the one hand, of the solidarity and cohesion between member countries and, on the other, of the determination of the Atlantic Alliance in its primary mission of defending the Euro-Atlantic territorial integrity against any possible aggression and threat. external.

With the influx of the ISR platoon, the national contribution to the Latvia mission is 200 units.

More than 4 tons of pasta were distributed by the soldiers of the Italian contingent of UNIFIL to two houses of ...
34
Read

100 days were particularly intense those just passed by the European contingent in Somalia, in which it is ...
566
Read