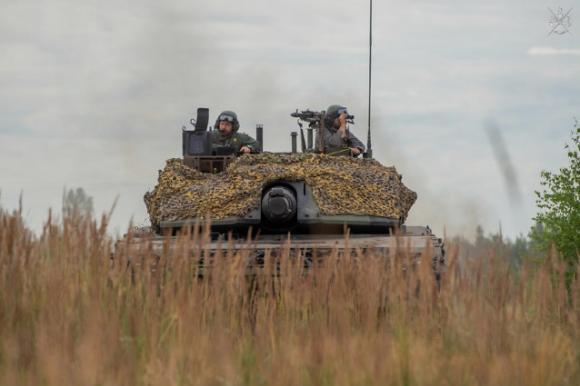 From 30 August to 2 September, the Italian operating company framed in NATO eFP battle group Latvia, took part in the exercise Valiant Strike held at the training areas of Adazi.

The tactical theme of the exercise was that of the active defense of a position maintained by a unit of the tactical group level, first by engaging in combat with the enemy outposts and then by stiffening the deployment to defend an area deemed of vital interest.

The maneuver, developed by battle group international, was conducted in the environment war, simulating complex actions in attack and defense, with the deployment of opposing forces represented by a company on a Canadian base reinforced by the Italian scouting bus platoon enucleated by the 19th Salerno guide regiment.

The difficulties of the operational scenario, all centered on hostile factors, were increased by the use of urgent procedures in communications and in the transmission of orders, activating the protocol procedures envisaged in the event of a disturbed environment.

Excellent contribution from the Italian company, led by the captain of the Bersaglieri Pierre Ciampi, which, articulated on two platoons of the 8th Bersaglieri Regiment of Caserta and a platoon of the 4th Persano Tank Regiment, especially in the stiffening phase of the defense position. , led the main effort under the maneuver design of the battle group, highlighting a very high level of preparation and training that has not gone unnoticed, especially in the eyes of Canadian Lieutenant Colonel John Benson, commander of the NATO eFP battle group Latvia.

The exercise Valiant Strike it was prodromal to the exercise Silver arrow, which will be conducted starting from Sunday 5 September by the Latvian mechanized brigade under which the battle group international.

In the presence of the air squad general Nicola Lanza de Cristoforis, deputy commander of the Operational Command of ...
823
Read

On 19 May, the European Multi Mission Frigate Carlo Bergamini received a distress call from the ...
1042
Read