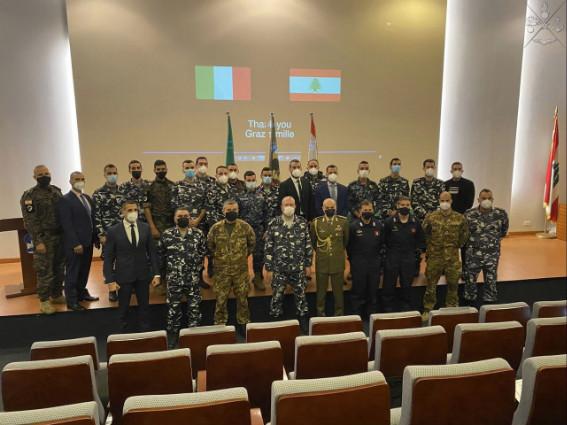 On December 17, 2021, the concluding ceremony of the "Negotiation with Key Elements" training course took place at the Lebanese Military Academy of the Internal Security Forces (ISF) in Aramoun (Beirut) - Basic, Advanced and Train the Trainers.

Among the attendees at the event also col. Abou Daher, commander of the ISF Officers' Training Institute and Colonel Marco Zona, Italian military attaché of Defense in Lebanon.

The intense training activity, which began on November 15, 2021 with the start of the basic course and continued with the subsequent training modules, was conducted by a Mobile Training Team entirely made up of instructors under the al Special Intervention Team of the carabinieri.

As part of the numerous activities carried out, several periods were dedicated to the acquisition of the knowledge and skills necessary to provide the basic skills to act in operational emergency situations, through the adoption of an empathic strategy with the subject in crisis and in order to increase the chances of a peaceful solution to the event.

Various day and night practical exercises were also conducted aimed at creating a "reduced negotiation command post" capable of coordinating the negotiating team and the operational tactical support team, in a public security crisis event with barricade inside a public place by armed robbers, wounding of victims and taking hostages.

The enthusiasm for the issues addressed and the considerable commitment by the visitors have allowed, together with the expertise of the Mobile Training Team, the training of twenty negotiators, of which eight qualified "Junior Trainer".

In the future, the latter, supported by Italian instructors, will have the task of organizing and conducting similar training activities, in order to ensure continuity in the development of the newly acquired training capacity.

The excellent results achieved in the training project, completed through the adoption of scrupulous anti-contagion measures from SARS-COV2, testify to the crucial role of Italian Bilateral Military Mission in Lebanon in the constant increase of the training capabilities of the Lebanese Security Forces.

Nave Caio Duilio has recently crossed the Pillars of Hercules, undertaking the oceanic route that will bring unity ...
54282
Read

With the last two courses in favor of the National Police of Djibouti (PND), the activities of the section ...
494
Read

The Eurofighters of the “Black Storm” Task Force Air, located at the Mihail Kogălniceanu airport in Constanta - Romania ...
3205
Read

"Italy at the command of NATO Mission Iraq confirms the excellence of our country's Armed Forces at the level ...
874
Read