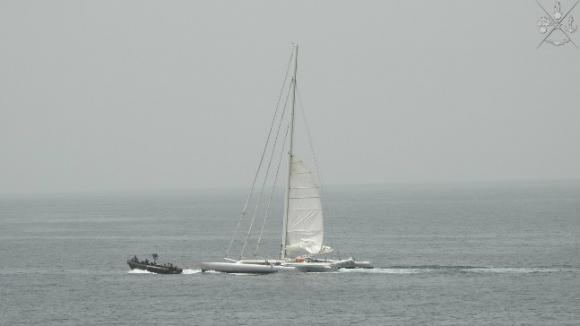 On May 19, the European Multi-Mission Frigate Carlo Bergamini received a distress call from the racing sailboat Lakota (owned by the famous French sailor Philippe Poupon), which had been attacked off the coast of Hodeida (Yemen).

Initially approached by three ships, the militants in civilian clothes, aboard them, showed assault rifles and rocket launchers and subsequently fired warning shots.

One of these "modern pirates" managed to get on board the Lakota, but realizing that there was no money or valuables to commandeer, he left the boat.

Meanwhile Ship Bergamini, leaving the port of Djibouti, after a logistical stop, has increased the sail to the maximum sustainable to reach the boat as soon as possible.

As soon as it was possible, the on-board helicopter flew to locate the position of the Lakota, provide assistance and provide detailed information on the current situation and ensure safety in the area before the arrival of the unit.

Once in the vicinity of the trimaran, the boarding team went aboard to inspect the unit and check the health of the crew.

During the day of the 19th and 20th, the unit always remained at the side of the Lakota, in constant eye and radio contact.

During the transfer, due to an engine failure, which cannot be resolved despite the assistance provided by an on-board mechanic, it was necessary to tow the boat using the minor means of Nave Bergamini.

After nearly two days of navigation, the crew reached the port of Djibouti safe and sound, where they were entrusted to the assistance of a unit of the Gibutinian Coast Guard.

Not being registered in the lists relating to the so-called "vulnerable to piracy" ships, the Lakota it was not monitored during its transit in the Red Sea, an action constantly carried out by the ships of the European Naval Force, operation Atalanta. and by all the Task Forces operating in the area to protect maritime traffic.

The Italian Navy continues to ensure safety at sea in the Indian Ocean.

In the presence of the air squad general Nicola Lanza de Cristoforis, deputy commander of the Operational Command of ...
661
Read

It took place on the afternoon of last Saturday, June 18, at the multipurpose hall of 'Camp Singara', the base that ...
267
Read