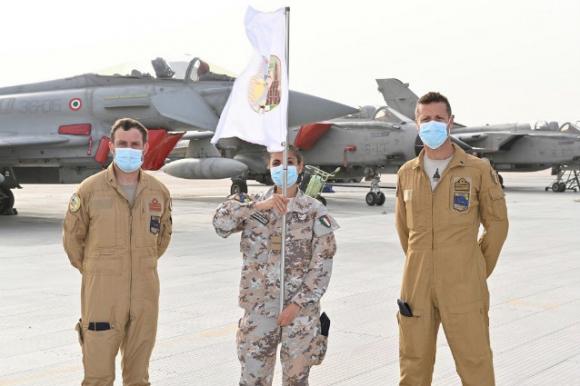 At the Ahmed Al Jaber area base in Kuwait, in the presence of Carlo Baldocci's ambassador of Italy in Kuwait, the ceremony was held that sanctioned the transfer of responsibility between the two Italian operational units that carry out the operation "Inherent Resolve" tasks of Intelligence, Surveillance and Aerotactic Reconnaissance, the Task Group Tornado "Devil", among the first assets to be deployed, in 2014, and the Task Group Eurofighter "Typhoon".

The event was chaired by the Deputy Chief of Staff of the Air Force, Air Squad General Luca Goretti, accompanied by the commander of the Italian National Contingent Command Air (IT NCC AIR) and Task Force Air Kuwait (TFA-K), Colonel Luca Giuseppe Vitaliti.

The ceremony was preceded by the handover in flight between the Tornado and Euro Fighter which, in a formation of 4 aircraft, flew over the flight line, alternating with the head of the formation, to seal theHandover-Takeover of duties and responsibilities within the coalition involved in the “Inherent Resolve” operation in Iraq.

The units of the Regional Command West, framed under the Piedmont Cavalry regiment (2nd) of the Army ...
186
Read

Nave Thaon di Revel, the last ship delivered to the Navy, left on 12 August from the port of La Spezia to ...
1953
Read

With the return respectively to the ports of La Spezia and Taranto, Nave Vulcano, under command of ship captain Alberto ...
681
Read