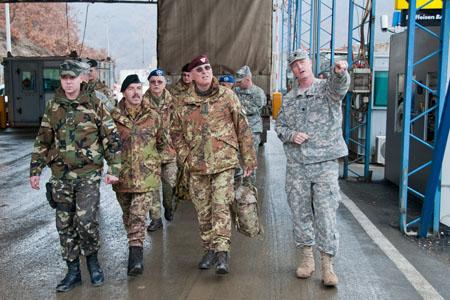 Arriving in Pristina in recent days, General Bertolini was received, in the multinational headquarters "Film City", by the Commander of Kosovo Force (KFOR), Divisional General Salvatore Farina who, together with the international staff, presented the current operating situation , highlighting the operations conducted by KFOR and future commitments. In particular, KFOR, together with other international and local institutions, will guarantee the security framework on the occasion of the elections for the North Mayor of Mitrovica, which will take place on the next 23 February.

General Bertolini then greeted the soldiers of the Italian contingent, expressing, in his speech, words of appreciation "for the daily contribution provided by the more than 550 soldiers, belonging to the three Armed Forces and the Carabinieri, for the maintenance of peace and stability in Kosovo ”. Italy is, in fact, one of the main supporters of the mission in Kosovo, where it has been working since 1999 for the stabilization of this delicate area of ​​the Balkans.

During his visit, General Bertolini, accompanied by General Farina, met the Italian ambassador, His Excellency Andreas Ferrarerese, with whom he had the opportunity to study the current local political situation and visited the Orthodox monastery of Decane, where was received by the Abbot Father Sava. This very important place of worship, from the 2004, is part of the UNESCO World Heritage List and is under the protection of the KFOR military belonging to the Italian-led Multinational Battle Group West.

In northern Mitrovica, in the logistics base of EULEX (European Union Rule of Law Mission in Kosovo), General Bertolini was able to meet the Italian staff of the Carabinieri Regiment named Multinational Specialized Unit (MSU, Multinational Specialized Military Unit) which operates in this part of Kosovo with a Serb majority. General Bertolini also carried out a survey of the main bases and outposts where the multinational units of KFOR are located, essentially in the northern area of ​​Kosovo. Here the KFOR military guarantees the surveillance and monitoring of the territory with patrols and monitoring of specific areas deemed sensitive. In particular, at one of KFOR's outposts located near the administrative demarcation line with Serbia, General Bertolini received a detailed update of the situation from the US-led Commander of the Multinational Battle Group East.

The visit of the Commander of the Operational Command of the Inter-force Summit ended in Belo Polje, in the field of "Villaggio Italia", headquarters of the Multinational Battle Group West, where General Bertolini, accompanied by the Commander of the Kosovo Force (KFOR), General of Salvatore Farina Division, he met the men and women of the Italian contingent operating in the west part of Kosovo under the command of Colonel Antonio Sgobba.

The units of the Regional Command West, framed under the Piedmont Cavalry regiment (2nd) of the Army ...
201
Read

Nave Thaon di Revel, the last ship delivered to the Navy, left on 12 August from the port of La Spezia to ...
1974
Read

With the return respectively to the ports of La Spezia and Taranto, Nave Vulcano, under command of ship captain Alberto ...
682
Read

On the afternoon of Thursday 28 July, with the arrival at Malbork Krolewo airport of the four Eurofighter F -...
449
Read