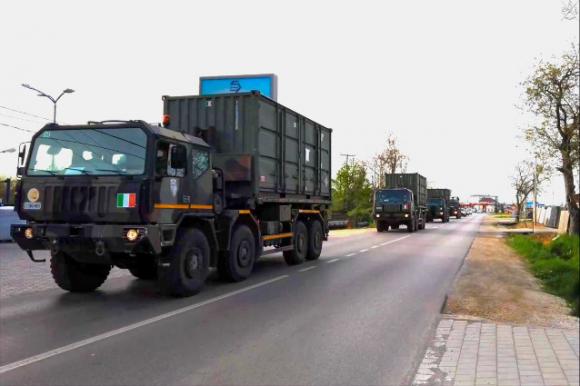 An important maritime mission to supply materials and vehicles from Italy to Kosovo was concluded today through the strategic section that connects Albania to Italy from the port of Durres.

Il Combat Service Support Battalion of Regional Command West, through the use of his specialized assets, he was the absolute protagonist of the delicate operation.

The activity was organized to clear, towards the 4th support line in Italy, the vehicles rendered inefficient during the fulfillment of the mission and at the same time reintegrate them with others reconditioned at the Supply and Maintenance Centers located on the national territory.

With a view to an ever-increasing optimization of the resources available, the movement was used to collect the materials necessary for the regular continuation of operational activities at the interport of Bari, an intermodal HUB for logistical support to the mission in Kosovo.

The entire logistics operation was planned by the ADERLOG operations room and monitored, during the conduct phase, through the cell Movements and Transportation (MOTRA).

Among the specialized assets of the Combat Service Support Battalion it should also be mentioned the CBRN team which carried out radiological checks and Joint Multimodal Operational Unit (JMOU), a specialized inter-force structure composed of military, Navy and Air Force soldiers responsible for the management of customs activities as well as for the movement of personnel, vehicles and materials on air and naval carriers used by the Defense.

The column was escorted during the Belo Polje - Durres route, both outward and return, by the Military Police of Camp Villaggio Italia which carried out the escort service to the roads.

The mission in Kosovo aims to ensure a stable and safe environment and ensure freedom of movement throughout the territory.

Currently it sees the participation of about 3500 soldiers from 27 countries under the command of Major General Franco Federici.

The frigate Carlo Bergamini returned to Taranto on 2 July at the end of a long period of assignment ...
212
Read