Kosovo: change of commander of the MSU regiment 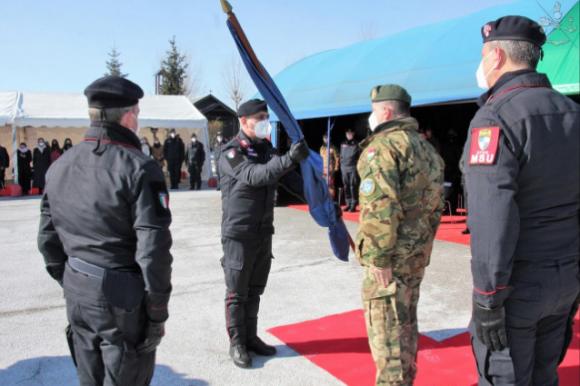 The commander change ceremony took place at the MSU regiment base in Pristina.

Colonel Stefano Fedele, commander of the MSU regiment since January 2021, is replaced by Colonel Maurizio Mele, commander of the courses department and teacher holder of the "Police Activities and Techniques" chair at the Center of Excellence for Stability Police Units (CoESPU) of the Carabinieri.

Colonel Fedele leaves his post in Pristina after 12 months to return home to the general staff of the Carabinieri legion Toscana.

The Italian ambassador to Kosovo, Antonello De Riu, the commander of Italy, took part in the alternation, which took place in front of the regiment - currently made up solely of military personnel - deployed in arms in the "Martiri di Nassirya" square of the MSU base. of the mobile and specialized units of the Carabinieri, general of the army corps Gianfranco Cavallo, the commander of the Kosovo ForceMajor General Ferenc Kajari and several Kosovo civilian and military authorities.

Also present were some representatives of the NATO assets operating in Kosovo with the delicate task of guaranteeing the stable coexistence and freedom of movement of citizens.

During the farewell greeting, Colonel Fedele underlined the important role played by the MSU regiment, present for over 22 years throughout the territory, thanking all the carabinieri for their commitment, professionalism and self-denial every day in carrying out the own mission.

The outgoing commander also highlighted the considerable collaboration established with the international actors present in the operational theater, from the KFOR mission to the OSCE to the Kosovar government organizations.

These links have allowed constant contact with the population and - moreover - the realization of important civil-military cooperation projects and assistance to local communities, first of all the delivery of seven Friendly Rooms - places where to welcome and listen to vulnerable victims - at as many stations of the Kosovo Police.

In turn, the army corps general Cavallo expressed great satisfaction with the work of Colonel Fedele, at the same time underlining the importance of the effort made by the more than 6 thousand carabinieri who have alternated over the years in Kosovo, who have worked in favor of the people and constantly alongside the institutions, in analogy to what has been happening every day in Italy for over two centuries.

The commander of KFOR also expressed his personal applause for the wise command action and for the uncommon dedication shown by the transferring commander in the past year, skills enhanced by the shrewd management of the department in constant ongoing pandemic situation.

The ceremony took place in full compliance with the anti-COVID-19 regulations.