Kosovo: change of the RC-W guard 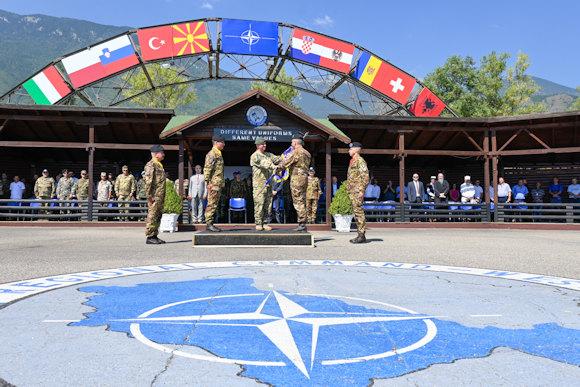 The change ceremony of the Regional Command West (RC-W), the Italian-led multinational unit, took place yesterday at the base called Camp Villaggio Italia, in Belo-Polje near the town of Pec / Peja, responsible for the western sector of Kosovo.

The outgoing Italian contingent, based on the brigade's "Horse" land artillery regiment Pozzuolo del Friuli was alternated by the regiment Piedmont Cavalry (2 °).

The ceremony marks the passing of the baton between Colonel Marco Javarone and Colonel Ivano Marotta, who takes over the leadership of the RC-W of the NATO mission called "Joint Enterprise".

The Italian ambassador to Kosovo s and dr. Antonello De Riu, the honorary consul of Italy Naim Gacaferi, the commander of KFOR division general Ferenc Kajári, the chief of staff of the COVI division admiral Valter Zappellini, the commander of the Regional Command East (RC-E) of KFOR Colonel Christopher Samulski, the commander of the Multinational Specialized Unit (MSU) Colonel Maurizio Mele, representatives of the OSCE, UNMIK, the mayors of the municipalities of Western Kosovo and the religious authorities of all faiths present in the Area of ​​Responsibility.

Colonel Javarone thanked all the authorities for their presence and, addressing in particular the women and men deployed, declared, "This period has given me the opportunity and the privilege of commanding soldiers representing ten different nations: I want to thank them all for the professionalism and determination they have shown throughout their mandate and to say that each of them has provided a precious and significant contribution. "

KFOR is the most consistent NATO mission by number of soldiers, with its 3.700 men and women employed, of which about 628 are Italians belonging to all four Armed Forces, who daily contribute to a safe environment and freedom of movement for all communities living in Kosovo, in accordance with UN resolution no. 1244 of 1999.

The Aerial Shield exercise has just been held at the RC-W Camp Villaggio Italia, dedicated to the defense of Counter ...
138
Read

The units of the Regional Command West, framed under the Piedmont Cavalry regiment (2nd) of the Army ...
5732
Read

Nave Thaon di Revel, the last ship delivered to the Navy, left on 12 August from the port of La Spezia to ...
2373
Read

In the afternoon of August 8, an anti-piracy and Maritime exercise took place in the waters of the Gulf of Aden ...
823
Read

It took place yesterday in the Italian Headquarters of Shama, named after Lieutenant Andrea Millevoi (MOVM), in the presence ...
290
Read