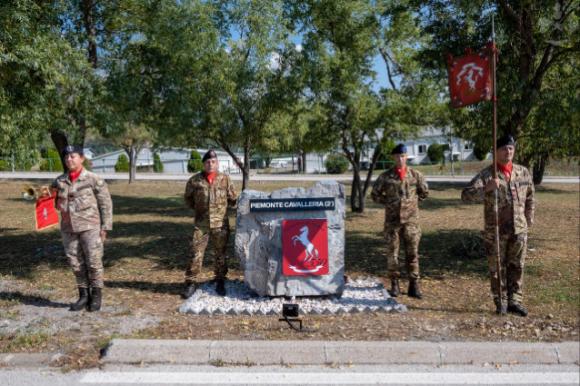 Al Regional Command West (RC-W) of KFOR, a short but solemn ceremony was held today which saw the regiment Piedmont Cavalry (2 °), the department that leads the multinational unit at the “Camp Villaggio Italia” base, to celebrate the considerable milestone of the 330 years of its constitution and to start operations in the Kosovar operating theater.

A traditional memorial stone was inaugurated in the presence of the representatives of the 10 nations that make up RC-W and the 97th commander, Colonel Ivano Marotta, dedicated a thought to the values ​​and the centuries-old history of the Banner of Piedmont Cavalry, as a reminder to continue working with the same dedicated self-denial that originated in 1692, also and above all towards the delicate tasks entrusted by KFOR.

The regiment Piedmont Cavalry (2 °), explorer unit of the alpine brigade "Julia", took office last July 26 under the command of RC-W, in the locality of Belo-Polje near the town of Peja / Pec.

The Aerial Shield exercise has just been held at the RC-W Camp Villaggio Italia, dedicated to the defense of Counter ...
149
Read

The units of the Regional Command West, framed under the Piedmont Cavalry regiment (2nd) of the Army ...
5781
Read

Nave Thaon di Revel, the last ship delivered to the Navy, left on 12 August from the port of La Spezia to ...
2378
Read

In the afternoon of August 8, an anti-piracy and Maritime exercise took place in the waters of the Gulf of Aden ...
828
Read

It took place yesterday in the Italian Headquarters of Shama, named after Lieutenant Andrea Millevoi (MOVM), in the presence ...
291
Read