KFOR: the airspace over the skies of Kosovo reopens after 15 years 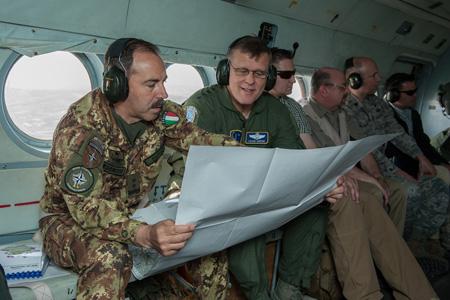 After 15 years since the start of the NATO-led military mission, civilian air traffic over the skies over Kosovo was reopened yesterday.

The technical agreement signed a few weeks ago by the commander of the NATO-led multinational mission in Kosovo, division general Salvatore FARINA and the authorities responsible for the management of civil air traffic in Hungary, is to be considered one of the most important steps towards normalization of this country. Since last April 3 it is in fact possible to carry out the direct overflight by civil aircraft of the airspace of Kosovo along the international routes. The manager of these routes is HungaroControl, the Hungarian agency responsible for the administration of the air navigation services of this country. The decision that led to the signing of the final agreement stems from a process launched a few years ago within the North Atlantic Council which accepted the Hungarian government's offer to provide technical management of the service through HungaroControl. "The reopening of the airspace over the skies of Kosovo was possible thanks to the good will shown by all the political authorities of the neighboring nations, by the international organizations responsible for the management of navigation services and above all thanks to the patronage of NATO and KFOR. The implementation of this project will considerably shorten the geographical distance between the countries of the Balkan region but not only. Europe itself is now closer! "Said General Farina at the signing of the agreement. "This operation also has a symbolic significance in view of the normalization of Kosovo after 15 years since the arrival of NATO-led multinational military forces: today more than ever I consider the opening of this important portion of airspace as an ideal bridge that can even more unite the peoples. We must not forget the aspects connected with the economic saving and the environmental advantages inherent to the operation "added the commander of KFOR. "To give an example, the approximately 180 thousand aircraft that fly over Kosovo in a year will shorten the routes of almost 370 thousand nautical miles for an overall saving that is around 18 million in favor of the airlines and, consequently, of passengers. I also consider important the positive ecological impact deriving from the implementation of this project: 24 thousand tons of fuel less equivalent to a reduction of 75 thousand tons of CO2 emissions in the atmosphere ". In line with the UN Security Council resolution 1244 and the military technical agreement signed in the 1999 authorizing the NATO-led military force to operate in Kosovo, the airspace in question will still remain subject to the authority of NATO and KFOR.