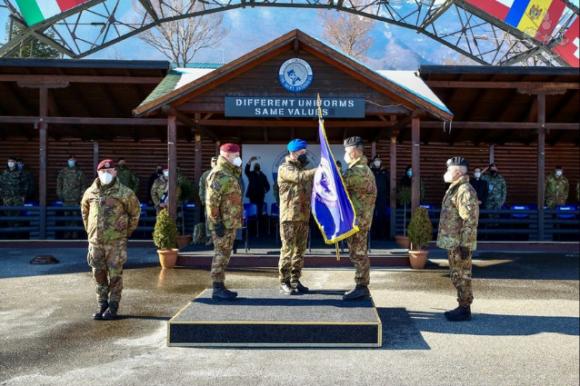 On January 16, 2022, it took place at the named base Camp Village Italy, in the locality of Belo-Polje near the town of Peja / Pec, the ceremony of change of command of the Regional Command West (RC-W), the Italian-led multinational unit responsible for the western sector of Kosovo.

The outgoing Italian contingent, based on the 185th Parachute Artillery Regiment thunderbolt it was alternated by the land artillery regiment "on horseback" of the brigade Pozzuolo del Friuli.

The ceremony marks the passing of the baton between col. Andrea Bertazzo, who after six months of mandate gives up the command, and col. Marco Javarone, who takes over the leadership of the RC-W of the NATO mission named Joint Enterprise.

Brigadier General Luca Piperni, deputy commander of KFOR and in presiding over the passage of the NATO flag, highlighted how "KFOR is the NATO mission that most represents a success for the Alliance, considering the current security climate in which various communities of Kosovo can live and underline how teamwork and cohesion are necessary characteristics to best respond to the mandate received, qualities that Yellow Devils of the outgoing contingent have been able to express in the strictest meaning of the motto Duty Realibility Commitment, coined for KFOR XXVI ".

The Italian ambassador in Kosovo dr. Antonello De Riu, appreciated the commendable results achieved by the RC-W military in full compliance with the international mandate, underlining the delicacy of the work carried out by the Army paratroopers belonging to the brigade thunderbolt, appreciated by local institutions and the Kosovar population.

KFOR is the most consistent NATO mission by number of soldiers with its 3.700 men and women employed, of which about 628 are Italians belonging to the Army, Navy, Air Force and Arma dei Carabinieri, who daily contribute to a safe environment and to freedom of movement for all communities living in Kosovo, in accordance with UN resolution No. 1244 of 1999.

Nave Caio Duilio has recently crossed the Pillars of Hercules, undertaking the oceanic route that will bring unity ...
54433
Read

With the last two courses in favor of the National Police of Djibouti (PND), the activities of the section ...
498
Read