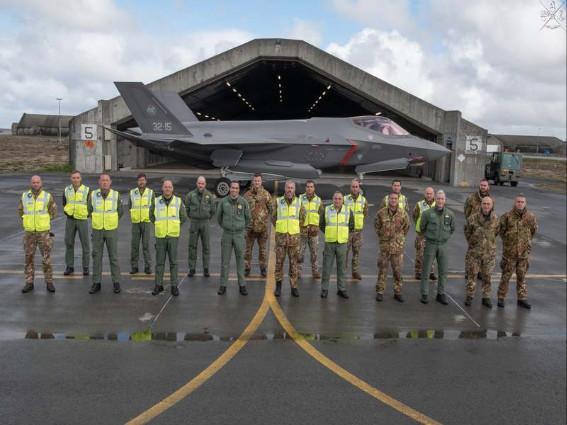 From 13 to 17 June 2022 a team of evaluators of theTactical Evaluation Office (UVT) of Aerospace Operations Command made a Staff Assisted Visit (SAV) to the flight group of the Air-Iceland Task Force deployed at the Keflavik airport, as part of the NATO Air Policing Operation “Northern Lightning III”.

In line with the provisions of the "NATO Response Force Certification Process" for the year 2023, the ability of the Task Group in the role Air Defense Fighter - Advanced (ADX), evaluating in the operational theater the current use of assets engaged in air defense activities in the skies of Iceland.

In fact, every year the countries belonging to NATO make part of their forces available to the Alliance to achieve the common goal of Defense and Security, as defined in the strategic plans of the Atlantic Pact. These assets constitute the NATO Response Force (NRF), and have the characteristic of being able to be used in a very short time.

Nations are therefore called to "certify", that is to formally declare, that organization, personnel, materials and systems meet the required criteria and standards. For this purpose, the Air Force makes use of theTactical Evaluation Office, element of the IT-Air Warfare Center within the Aerospace Operations Command which organizes, coordinates and conducts the evaluation activities of the capacitive packages offered to NATO.

The verification of the state of preparation and readiness of one's own Forces, and in particular of those included in the NATO Response Force (NRF) basin, therefore becomes a fundamental element for the exercise of command action and control functions to provide to the Supreme Commander of the Allied Forces in Europe (SACEUR) the necessary confirmation that the declared assets for the aerospace component are prepared and capable of responding to current and contingent operational priorities in accordance with NATO standards.

In the presence of the air squad general Nicola Lanza de Cristoforis, deputy commander of the Operational Command of ...
799
Read

On 19 May, the European Multi Mission Frigate Carlo Bergamini received a distress call from the ...
1015
Read