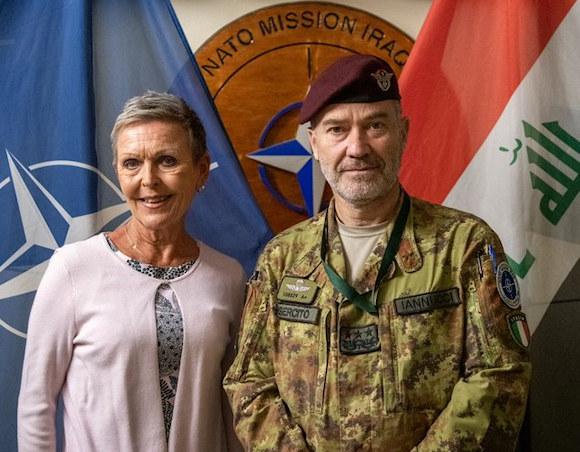 The commander of the NATO Mission in Iraq (NMI), gen. Giovanni Maria Iannucci met at the Hotel Al Rashid in Baghdad, the headquarters of the European Union Advisory Mission Iraq (EUAM), a representation of the European Parliament led by the Hon. Nathalie Loiseau (France), composed of Members from: Estonia (Hon. Urmas Paet), France (Hon. Arnaud Danjean), Germany (Hon. Bernhard Zimniok), Lithuania (Hon. Juozas Olekas) and Spain (Hon. Jevier Nart) as well as Ville Varjola, head of the European Union delegation, which has been operating in Iraq since 2017.

To do the honors Anne Meskanen, EUAM Head of Mission, who, after welcoming the commander of NMI, thanked him for joining the invitation and highlighted the synergies and opportunities for cooperation between NMI and EUAM, underlining the excellent report on the field.

The European Union certainly plays a leading role in Iraq, committed to offering strategic advice within the "Security Sector Reform Program" to key figures in the Iraqi Ministry of the Interior, while NATO, with NMI, has the task of strengthening the Iraqi institutions with programs aimed mainly at the Ministry of Defense.

A context in which NATO personnel, in full respect of the country's sovereignty and its territorial integrity, also provide advice to military educational and training institutions located in the Baghdad area.