Iraq: change of commander at Griffon 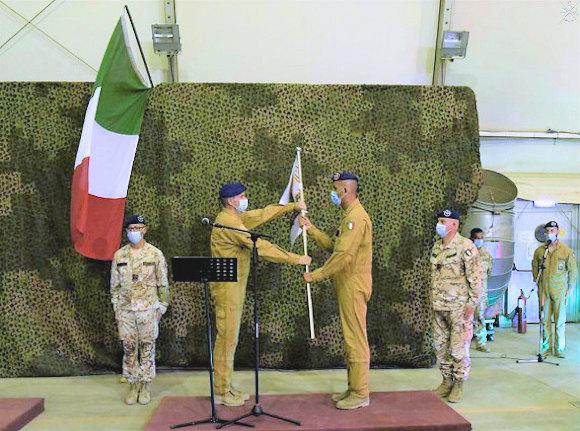 On the evening of last Tuesday 10 August at the "Italian ramp" of the Erbil International Airport, in Iraqi Kurdistan, the ceremony that sanctioned the change in leadership of the Airmobile Task Group "Griffon", the department involved in the helicopter transport activities included in the mission in Iraq of the Italian contingent. After six months at the helm of the "blue berets", Lieutenant Colonel Francesco Colucci handed over the command to the Parisian Mario Giorgi.

The commander of ITNCC-LAND (the Italian contingent) Colonel Domenico Di Biase intervened at the event, which took place in compliance with the containment measures of the contagion from Covid-19, as well as a representation of US soldiers belonging to the "Combat Aviation Brigade" headed by their commander Colonel (US Army) Alan Gronewold, on whom the "Griffon" depends for the operational employment component.

In his farewell speech, Lieutenant Colonel Colucci addressed the women and men of the "Griffon" lined up for the occasion: "My last and most important thanks go to you. You are professionals of great depth, capable, competent, courageous and loyal. Together in these months we have built a single, compact block and played as a team. I have always been able to count on. you and your dedication! Each was an important part of a complex mechanism that has a single purpose: the fulfillment of the tasks assigned in the context of Operation Inherent Resolve ".

Finally, turning to the incoming commander, he gave him good luck for the new adventure, with the wish for ever greater successes and satisfactions.

Taking the floor for his greeting address, Colonel Di Biase first of all wanted to address his grateful thoughts to all members of the coalition and to the Iraqis who gave their lives in the fight against Daesh, a terrorist organization still capable of threatening freedom and progress with its devastating ideology. Then thanking the transferring commander for the flattering results achieved during his time in command, he recalled perhaps the most important one, namely the achievement of 3000 flight hours in his "Air mobility" missions in the service of the coalition.

He also underlined how over the years the "Griffon" has become one of the best units deployed in Iraq, a great example for all and that it must be proud of the many achievements. "I am proud of you. With your banner you best represent the unity of purpose of the coalition in the common effort to support the hope of all Iraqis fighting for peace and prosperity".

Before concluding, he welcomed the new commander and wished him the best of luck in his new position. The solemn passage of the pennant also formally sanctioned the transfer of authority between the two commanders.