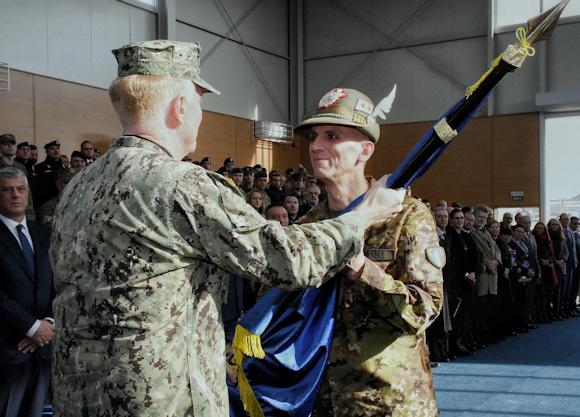 The changeover ceremony took place in the presence of Defense Minister Lorenzo Guerini, the Chief of Defense, General Enzo Vecciarelli and the commander of the Allied Joint Force Command of Naples, Admiral James G. Foggo III, as well as numerous authorities civil, military, religious and diplomatic.

In his farewell address, General D'Addario emphasized how the collaboration between KFOR, the International Community, the institutions in Kosovo and the neighboring countries, has led to a huge change, characterized by two decades of peace and stability. A commitment that gives rise to the motto "United in Commitment" which accompanied his entire mandate as commander of the NATO mission, in which 3.500 units from 20 countries of the Atlantic Alliance and 8 partner nations are engaged, with the Italy second contributor with military 600.

General D'Addario also retraced the highlights of his command period, including the rationalization from an operational point of view of the forces in the field, with the establishment of two Regional Commands, West and East, the first of which with Italian leadership based in Pec / Peja. Thanking the men and women who served the mission, he highlighted the role of their families, whose daily support allows the military to operate peacefully and effectively.

Previously, Admiral Foggo highlighted the great work done by the outgoing commander in promoting dialogue between the parties, in collaboration with national and international actors. In his inaugural address, General Risi expressed his intention to continue the work of KFOR in the name of stability, to contribute to the progress and prosperity of a region of strategic importance for the Euro-Atlantic area.

Joint training between UN quotas was conducted from 13 to 17 January - in particular ItalBatt ...
35
Read

Standing NATO Maritime Group 2 returned to the sea after the winter break. The Naval Group, consisting of four ...
363
Read

Two days of study ended in recent days in Niamey, as part of the mission in Niger MISIN, ...
207
Read

Start of intense year for Civil and Military Cooperation (CIMIC) activities in favor of the Kosovar population ....
460
Read

The commitment of the Italian contingent of Resolute Support continues, currently based on the 132nd armored brigade "Ariete" at ...
175
Read

Yesterday Carabiniere Ship left from the naval base of Taranto for an operational deployment of six months in the role of ...
1512
Read

Operational readiness, reactivity, interoperability, flexibility of use, ability to cooperate, effectiveness in ...
811
Read

As part of the mission in Niger, the first training course was held in recent days ...
147
Read