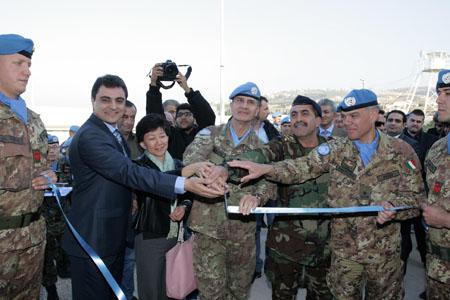 (Naqoura) The Director of Asia and Middle East Division, DPKO Office of Operations (Department for Peacekeeping Operations), Ms Izumi Nakamitsu, arrived on Saturday in South Lebanon on an official visit to UNIFIL, welcomed by the Force Commander and Head of Mission, General of the Paolo Serra Division.

During the meeting, Ms. Nakamitsu expressed words of appreciation for the meritorious work carried out by UNIFIL civilian and military personnel engaged in the implementation of the delicate mandate of the UN Security Council's 1701 Resolution, underlining the high profile of the mission.

Ms. Nakamitsu, during the rest of the visit, visited some advanced bases of the West (Italian-led) and East (Spanish-led) sectors, paying particular attention to those located along the blue line - the reference line for the Israeli forces to withdraw in the 2000 -

UNIFIL, at the moment, consists of about 12000 military personnel from 38 Nations and 1000 civilian employees, including local 700 and international 300. The data provided also includes the strong naval component of 7 ships and 1000 sailors, constituting the Maritime Task Force operating along the Lebanese coasts, and the Aviation Unit, consisting of 6 helicopters.

The units of the Regional Command West, framed under the Piedmont Cavalry regiment (2nd) of the Army ...
168
Read

Nave Thaon di Revel, the last ship delivered to the Navy, left on 12 August from the port of La Spezia to ...
1940
Read

With the return respectively to the ports of La Spezia and Taranto, Nave Vulcano, under command of ship captain Alberto ...
680
Read