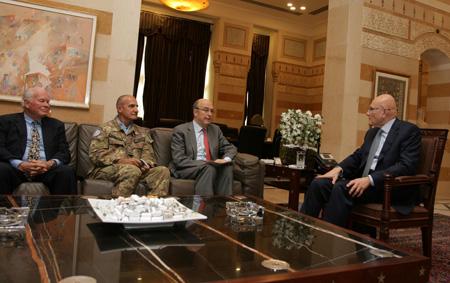 The new premier Salam expressed his appreciation for the situation of calm and stability maintained in the UNIFIL operation area, stating that "the work carried out jointly with the Lebanese Armed Forces has produced a substantial improvement in the security of the south of the country and that 'intent remains to continue on this path of strategic partnership ".

During the meeting, aspects related to the mandate of the UNIFIL mission regarding the implementation of the UN Security Council 1701 resolution were addressed, with particular attention to cooperation between UNIFIL peacekeepers and the Lebanese Armed Forces (LAF).

At the end of the talks, the Force Commander thanked the prime minister for the continued support received from the government authorities in support of the mission.

Joint training between UN quotas was conducted from 13 to 17 January - in particular ItalBatt ...
299
Read

Standing NATO Maritime Group 2 returned to the sea after the winter break. The Naval Group, consisting of four ...
454
Read

Two days of study ended in recent days in Niamey, as part of the mission in Niger MISIN, ...
266
Read

The commitment of the Italian contingent of Resolute Support continues, currently based on the 132nd armored brigade "Ariete" at ...
189
Read

Yesterday Carabiniere Ship left from the naval base of Taranto for an operational deployment of six months in the role of ...
1539
Read

Operational readiness, reactivity, interoperability, flexibility of use, ability to cooperate, effectiveness in ...
827
Read

In the mission in Afghanistan, the Italian contingent of "Resolute Support", currently leading 132nd brigade ...
96
Read

As part of the mission in Niger, the first training course was held in recent days ...
154
Read