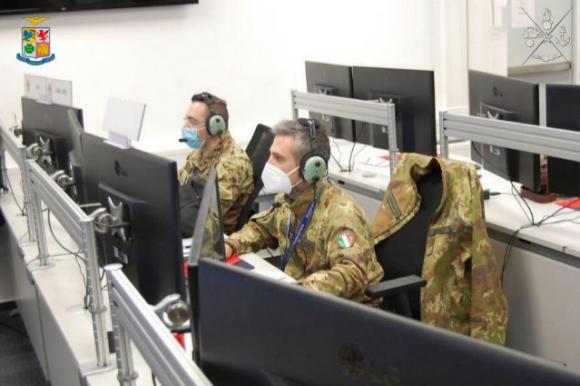 The exercise took place in Ramstein, Germany, from 13 to 16 December Spartan Alliance 21-12 (SA 21-12) as part of NATO activities Mission Training Through Distributed Simulation (MTDS), as part of the more general program of Modeling & Simulation.

The activity was aimed at promoting synthetic training in air operations, i.e. training conducted with real methods and procedures but in the absence of real assets, through the connection and sharing of information between flight simulators, weapon Balistic Missile Defense (BMD) and Command and Control systems.

The exercise consisted of a tactical-level simulation, carried out at the USAFE-AFAFRICA Warfare Center (UAWC), of a Large Force Employment or, in purely NATO terminology, of a COMAO (Composite Air Operation): complex air campaign within a well-structured crisis context that involves the involvement of a considerable number of assets and specialized operators, as well as sophisticated simulation systems connected each other via a called network Combined Federated Battle Laboratories Network (CFBLNet).

In addition to the Air Force which provided its contribution with personnel of the Aerospace Operations Command (AOC), with 16th Wing Air Riflemen equipped with JTAC capability (Joint Terminal Attack Controller) and with a crew of an MQ-1 aircraft of the 32 ° flock - 61 ° APR group of Sigonella, also USAFE personnel took part in the exercise Warrior Preparation Center, of the German Air Force and the Royal Netherlands Air Force.

The COA sent elements of the office to Ramstein Modeling & Simulation of the IT-AWC (Italian Air Warfare Center) and Air Defense controllers of the 11th and 22nd GRDAMI (Integrated Missile Air Defense) of the DAMI department of the Aerospace Control Brigade.

On the occasion of the visit to Ramstein of General ba Andrea Argieri, Chief of Staff of the Air Squad Command, the USAFE Warrior Preparation Center appreciated the work of the office Modeling & Simulation of the IT-AWC which has proved to be a leader in the sector in the innovation of distributed simulation, an area that allows to guarantee constant training of the personnel of the various operational departments in carrying out complex aerial operations performed within increasingly realistic scenarios and with operators located in their own departments, therefore distributed throughout the territory, with consequent considerable savings in terms of economic and logistical resources.

Thanks to the IT-AWC also the aerospace operations command has the ability to develop simulation capabilities of an air campaign and is an integral part of the broader program Modeling & Simulation at the NATO level.

Nave Caio Duilio has recently crossed the Pillars of Hercules, undertaking the oceanic route that will bring unity ...
54430
Read

With the last two courses in favor of the National Police of Djibouti (PND), the activities of the section ...
498
Read