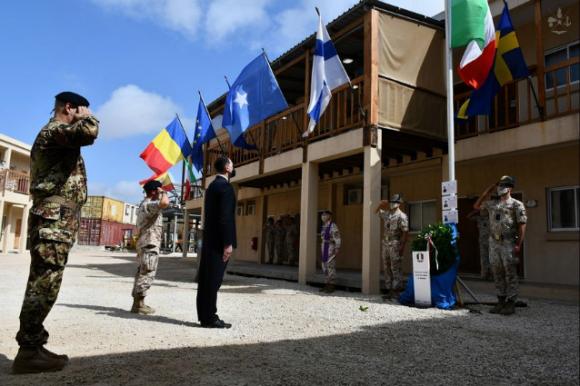 On 2 July 1993, as part of Operation IBIS II, a routine mission, codenamed Kangaroo 11, must guarantee the transit of two columns of Italian armored vehicles made up of heavy M-60 tanks, Vcc-1 troop transport vehicles Camillino and armored Centaur.

The aim is to reach some strongholds in the hands of General Aidid's men and carry out a roundup that most likely would have led to the confiscation of concealed weapons intended to be used against the international contingent.

Once in the area, the Italian soldiers are greeted with a stone throw by groups of demonstrators.

Once the roundup has been completed, the order is to return immediately to the base to prevent the situation from worsening involving the civilian population. But it is too late, the Somali militiamen ambush near the pasta factory.

Three casualties remain on the field: second lieutenant Andrea Millevoi effective in the lancers regiment of Montebello; Sergeant Major Stefano Paolicchi of the 9th parachute assault regiment With Moschin and the corporal Pasquale Baccaro, under the 186º parachute regiment thunderbolt.

To honor their memory, a ceremony took place this morning in the square of honor of EUTM-S HQ, during which the reasons that led to the award of the Gold Medal for military valor were read.

After a brief speech by the ambassador to Somalia, HE Alberto Vecchi, and by the commander of the EUTM-S mission, Brigadier General Fabiano Zinzone, a commemorative wreath blessed by the military chaplain, Fr Nicolas Hedrul, was placed.