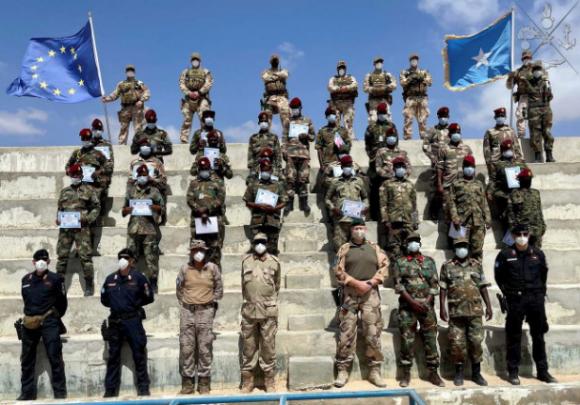 At General Daghabadan Training Center the closing ceremony of the introductory phase of the 1st MP course for the Somali armed forces conducted by the Carabinieri Instructors of the European Mission for the Training of the Somali Armed Forces (EUTM-S).

The course, whose purpose is to train some members of the Somali National Armed Forces in military police techniques, it saw the participation of 27 soldiers, including 3 women, from 37th military police battalion Somali interact with our carabinieri over the course of 3 weeks.

Over 4 weeks, the Carabinieri Instructors instructed their Somali colleagues on the main military police techniques such as the search, the safe arrest of the suspect, the investigation and obviously the basic notions of Human Rights.

The EUTM Mission has trained up to now more than 7000 units of the Somali National Army, starting from individual combat training, to the use of complex units, to get to the preparation for fighting in inhabited centers.

The EUTM Somalia Mission, through the activities of Advising, Mentoring e Training, carried out in favor of the staff of the Somali Ministry of Defense, the Somali Defense Staff, key figures of theSomali National Army (SNA) and tactical pawns from the battalion up to the team level, contributes to the development of the Somali security forces' capacity to control the territory to favor the conditions for the development and normal growth of the country.