Home News armed forces Missions Eurofighter: a record flight over the skies of ...

Eurofighter: a record flight over the skies of Iraq 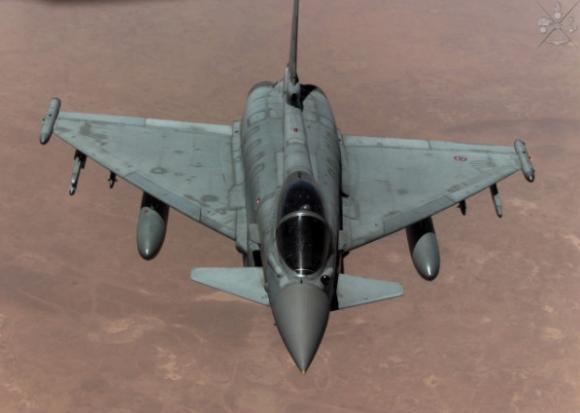 On April 14, as part of the mission Inherent Resolve, two aircraft of the Task Group Typhoon under the Italian National Contingent Command - Air in Kuwait, they carried out an operational aerial reconnaissance mission over the skies of Iraq lasting a good 8 hours from take-off to landing.

The Euro Fighter of the Italian Air Force has reached a new important milestone demonstrating the reliability and consolidated operational capabilities gained by the F-2000 aircraft.

This important result, which establishes a real record, was made possible thanks to multiple refueling operations in flight using the Coalition's aerial assets and proved the persistence and effectiveness that can be expressed by the weapon system.

The F-2000 aircraft, supplied to the Task Group Typhoon ranks among the multiple assets of the Italian Air Force assigned to Task Force Air, operational component of IT NCC-AIR, for the accomplishment of the mission assigned within the multinational operation "Inherent Resolve", in which the national operation "Prima Parthica".

THEEuro Fighter is a latest generation aircraft, one of the most advanced combat aircraft ever developed in Europe, capable of offering wide-ranging operational capabilities and unrivaled effectiveness in the Air Defense sector.