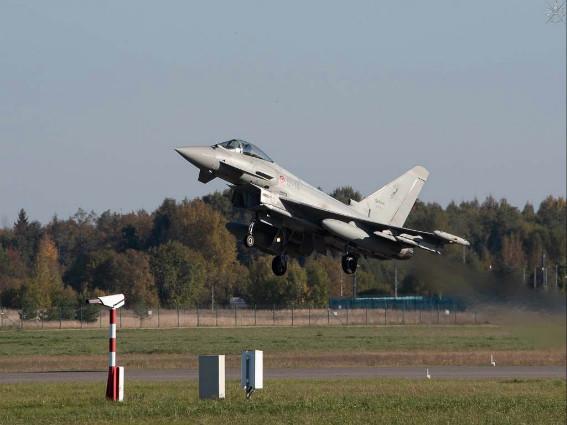 In the afternoon of 13 October, two Italian Eurofighter fighters Typhoon intervened, following an order of Alpha Scramble issued by Combined Air Operation Center of Uedem (Germany), in order to identify an aircraft that, in the NATO area of ​​competence, was not complying with the communication and recognition procedures with the Estonian air traffic authorities, thus constituting a potential danger for air navigation.

The two aircraft took off quickly and in a few minutes, thanks to the instructions provided by the Baltic air defense bodies, where they operate in support of Italian huntsmen, they intercepted the aircraft that crossed the Baltic airspace without having properly identified.

The Italian fighters, having carried out the recognition through the Visual Identification (VID) procedure, escorted the aircraft to the exit of the area of ​​competence, as ordered by the NATO Command, and then returned to the military airport of Ämari.

This is the third interception intervention by the Italian Eurofighters of Task Force Air Baltic Eagle II, led the 36th flock of Gioia del Colle (BA), deployed since September in Estonia as part of the NATO mission of enhanced Air Policing.

The actual surgery took place during a busy week for the Typhoon of the Italian Air Force which, in addition to ensuring the constant protection of the skies above the Baltic Republics, took part in the exercise Bold Panzer '21 with NATO enhanced Forward Presence Battlegroup Estonia, during which they conducted numerous close air support missions (in technical jargon Close Air Support - CAS), in favor of the Royal Tank Regiment, with the support of Joint Terminal Attack Controllers (JTACs).

In the presence of the air squad general Nicola Lanza de Cristoforis, deputy commander of the Operational Command of ...
792
Read

On 19 May, the European Multi Mission Frigate Carlo Bergamini received a distress call from the ...
1008
Read