The Italian mission in Afghanistan officially ended. Safe return of the last soldier of the contingent 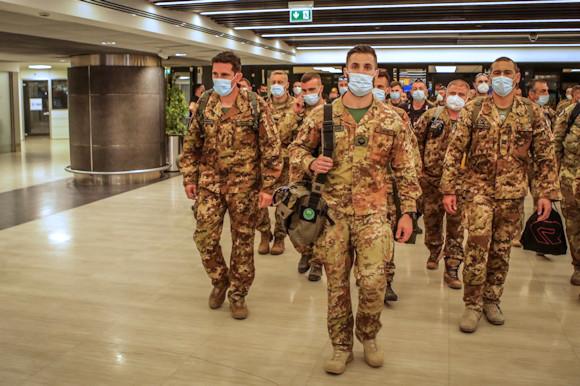 (To Ministry of Defense)

"Yesterday evening the Italian mission in Afghanistan officially ended. With the return of the last man of the Italian contingent, an impressive logistical and operational effort conducted with punctuality and safety by our Armed Forces ended in total safety. It does not end, however. the commitment of the international community, Italy in the first place, for Afghanistan which will continue in other forms, starting with the strengthening of development cooperation and support for the Afghan republican institutions " this is how Defense Minister Lorenzo Guerini commented on the arrival yesterday evening at the Pisa military airport of Brigadier General Beniamino Vergori, commander of the contingent, and of the last soldiers who were still deployed in Herat. Thus ended the phase of the return of the Italian contingent from Afghanistan.

"A touching and extraordinary moment with the closing of a significant chapter in our history. 20 years of national effort have ended, which have seen the dedication and spirit of sacrifice of our more than 50.000 men and women in uniform who have come and gone over these long years. and I want to remember with gratitude the 723 wounded and with deep emotion the 53 Italian victims who lost their lives in the service of the Republic and to bring stabilization and peace to Afghanistan " Guerini said.

The Italian commitment in Afghanistan - as announced by the Minister of Defense last June 8 during the flag lowering ceremony (see video) at the Italian base in the Asian country - will continue not only in terms of cooperation activities for the development and strengthening of the institutions but also in the training and strengthening of the Afghan Security Forces, in order not to disperse the results obtained so far.

The return operation was characterized by its complex nature - operational and logistical, encompassing the whole spectrum of military operational activities. A significant effort that the Operational Command of Vertice Interforze (COI) planned and conducted on the basis of a current situational picture of a volatile and complex operational theater that required a careful and constant analysis of all the purely operational aspects related to defense and protection of the quota.

In fact, the mission for Italy ends Resolute Support, which took over from the ISAF mission on 1 January 2015, which has had as its focus in recent years, training, consultancy and assistance to the Afghan Security Institutions (ASI - Ministry of Defense and Ministry of Interior) and to the Afghan National Defense Security Forces (ANDSF) at ministerial, institutional, and operational level.