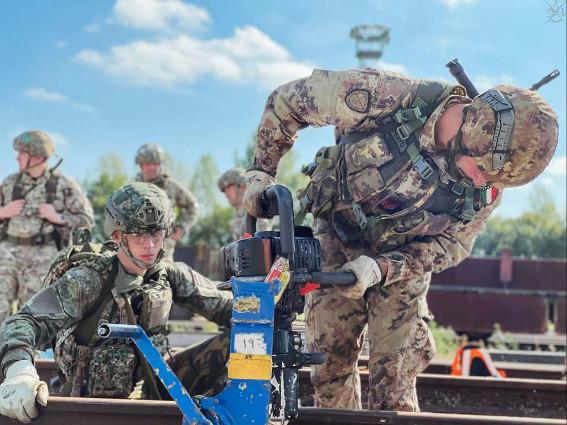 In recent days, at the training area of ​​Marlborough Barracks in Kineton in England, the bilateral exercise called Turnout Eng 2021.

The training activity involved the specialist arrangements of the railway engineer regiment and of the 507th Specialist Team Royal Engineer of the British Army, as well as representatives of the 101st Geniebatalyon of the Dutch Army, del Regimiento de Pontoneros y Especialidades de Ingenieros 12 of the Spanish army, and of the Spezialpionierausbildungs ​​und Übungszentrum Putlos of the German Army.

The important training moment made it possible to share skills and procedures of the Corps of Engineers and to carry out design and construction activities of fundamental infrastructures for railway traffic and for the tactical and logistical supply of units operating in areas of operation.

La Turnout Eng 2021, carried out in full compliance with the containment measures and contrast to the spread of CoViD-19, closed an intense training period for the engineers of the Italian Army, allowing to raise the level of integration and interoperability of the units. 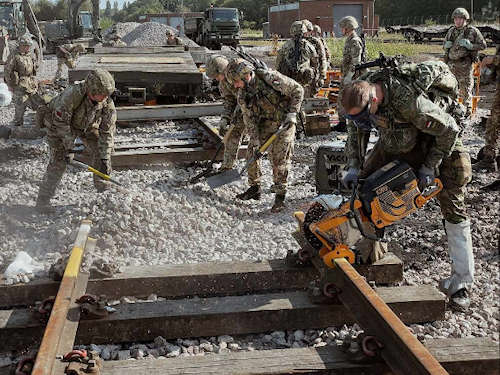 Brigadier General Chas Story, chief engineer of NATO Headquarters, attended the exercise Allied Rapid Reaction Corps (ARRC), which was able to ascertain the high level of training of the units involved and their ability to operate in a multinational environment.

The conduct of the activities and the by now consolidated collaboration between the NATO units confirm the strategic importance that the railway capability plays within the Alliance and the leadership role that Italy and the Italian Army have acquired over the years.

Indeed, our country represents the main NATO ally in providing the skills and abilities of the railway genius in building new railway tracks, in maintaining existing ones, as well as in exercising and managing rail traffic, both at home. and abroad, with personnel specialized in the duties of station manager, train driver, train manager, shunter / diverter and railway infrastructure operator.

The regiment also provides support to the NATO Rapid Deployable Corps - Italy (NRDC-ITA) of Solbiate Olona (VA) and is part of the fundamental operational capability of support, that is, the contribution of the Engineer Corps to the NATO forces employed in operations outside the national territory.

In the presence of the air squad general Nicola Lanza de Cristoforis, deputy commander of the Operational Command of ...
518
Read