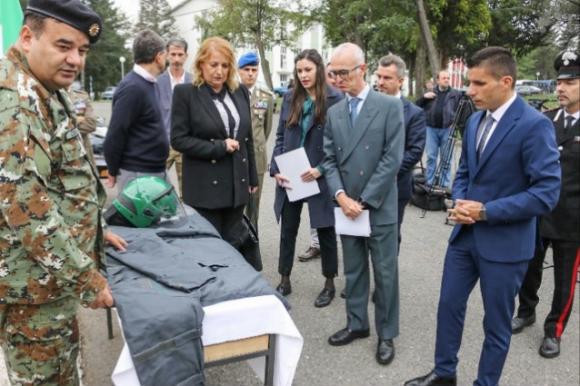 On the day of September 26, at the Gjorce Petrov barracks in Skopje, the Italian ambassador, Andrea Silvestri delivered a large donation of uniforms from the dissolved Forestry Corps of the Italian State.

The ceremony saw the formal transfer of the free transfer to the Minister of Agriculture and Forestry, Mr. Ljubco Nikolovski.

The large donation, including uniforms and equipment for public order, will allow, in fact, to feed part of the defense and interior equipment.

The heart of the donation is certainly uniforms and equipment for forest fire-fighting operations and will enter the endowment of the Department of the Ministry of Agriculture and Forests.

Launched in 2015 thanks to an initiative of the general command of the Carabinieri and the dissolved State Forestry Corps, today command forestry, environmental and agri-food units, the donation received decisive impetus in 2022, thanks to the intermediation of the military office of the embassy of Italy in Skopje.

The military office has promoted and coordinated the transport operations, with the use of over 20 trucks, of customs clearance across the borders between the EU (Greece) and North Macedonia, creating perfect inter-ministerial but above all international cooperation.

In fact, Italy has always been close to the country, with a strategic orientation on the centrality of the Balkans, in this historical moment.

This is evidenced above all by the recent visit of President Mattarella to the capital, who reiterated the strong support for North Macedonia on the European path and stressed that it is a central country in the solidity of the Western Balkans.

At the headquarters of the Engineering Regiment in Beirut, in the presence of Colonel Farhat of the training directorate, of the...
80
Read