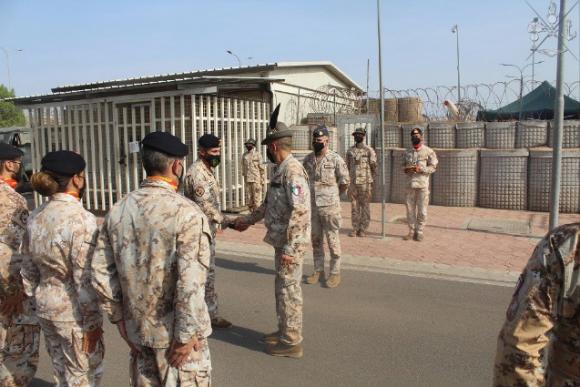 On September 16, the alternation ceremony of the "Force Protection" component of the Italian Military Support Base (BMIS) in Djibouti between the naval fusiliers of the 1st “San Marco” regiment of the homonymous “San Marco” marine brigade and the Alpine troops of the 2nd Alpini regiment of the “Taurinense” Alpine brigade of the Army.

The passing of the baton took place with a brief but significant ceremony during which, in the presence of a representative of BMIS personnel, the banner of the 1st “San Marco” regiment was lowered and that of the 2nd Alpini regiment was hoisted.

The commander of the BMIS, Colonel Luigi Bigi, greeted the soldiers of the alternating components, highlighting the peculiarity of the role played by the "Force Protection" both because it is called to ensure the security framework at the Base, and for the qualified contribution it provides in the activities to combat COVID-19 with the constant monitoring of those who access the grounds daily and with the disinfection interventions that are periodically carried out in the areas of the Base and the environments intended for the training activity of MIADIT when risked in Djibouti.

The col. Bigi also praised the 1st "San Marco" regiment navy fusiliers for the determination, professionalism and availability with which they carried out the task and wished a "good job" to the platoon of the 2nd Alpine regiment, in the certainty that he will be able to continue the valuable work carried out by the teams of “Force Protection” belonging to all the armed forces that have followed one another at the BMIS.

La Italian Military Support Base in Djibouti, led by Colonel (AM) Luigi Bigi, provides logistical support to all national components in transit on the Djiboutian territory engaged in the Horn of Africa and the Indian Ocean, with particular reference to the MIADIT Somalia, EUTM Somalia and EUNAVFOR Atalanta Missions .

The frigate Carlo Bergamini returned to Taranto on 2 July at the end of a long period of assignment ...
188
Read

The medical support activities (MEDICAL CARE) that the Italian contingent in Lebanon are carrying out in ...
45
Read