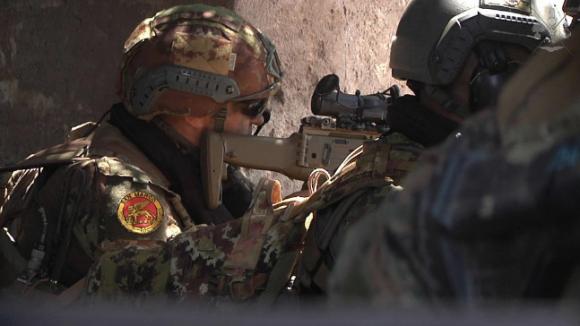 On 20 and 21 July i Leoni of the marine brigade Saint Mark have conducted joint training with the 22 marine expeditionary unit of the United States Marine Corps.

The team, consisting of 12 riflemen with capacity Joint Terminal Attack Controller - three-dimensional support fire management - and with military rescue personnel, he was picked up from the Aircraft Station of the Navy of Grottaglie (TA) last July 20 and was subsequently transported with a USMC CH-53E helicopter, on the USS Arlington (Amphibious ship of the American Navy), where intense joint planning phases were carried out aimed at a correct success of the planned mission.

The activity has seen a significant training return for the staff of the 1st rgt Saint Mark responsible for the direction and conduct of the exercise, as well as for health personnel and those employed as opposition forces (OPFOR).

The interaction with the 22 MEU is therefore confirmed as a valuable training opportunity for Navy Fusiliers, which must be pursued promptly in order to bring benefits in terms of professional experience, comparison with US Marines and sharing tactical procedures.

The units of the Regional Command West, framed under the Piedmont Cavalry regiment (2nd) of the Army ...
24
Read

Nave Thaon di Revel, the last ship delivered to the Navy, left on 12 August from the port of La Spezia to ...
1737
Read

In the afternoon of August 8, an anti-piracy and Maritime exercise took place in the waters of the Gulf of Aden ...
701
Read

It took place yesterday in the Italian Headquarters of Shama, named after Lieutenant Andrea Millevoi (MOVM), in the presence ...
235
Read

With the return respectively to the ports of La Spezia and Taranto, Nave Vulcano, under command of ship captain Alberto ...
673
Read

Production of electricity through the supply and installation of a photovoltaic system to power a ...
153
Read

On the afternoon of Thursday 28 July, with the arrival at Malbork Krolewo airport of the four Eurofighter F -...
441
Read

With the embarkation, from the port of Bari, of the first tactical and logistic vehicles, as well as of the logistic materials, ...
10367
Read