Seventy-four candles for the flag of the Italian Navy 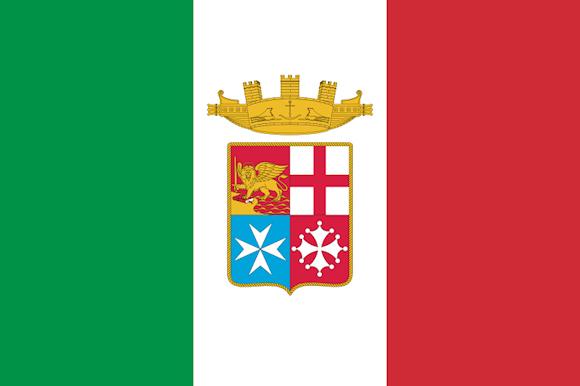 The establishment of the flag of the Navy, in its current form, dates back to November 9, 1947. The history of the Italian military naval flag describes a very fascinating path that is inevitably intertwined with that of the Italian tricolor, sometimes overlapping it since for eighty-seven years the Italian naval flag was also the official insignia of the Italian government.

The first Italian flag saw the light between the end of 1796 and the beginning of 1797 during the congress of Reggio Emilia, where, following the defeat of the Austrian army by the Army of Italy led by the French general Napoleon Bonaparte , it was decided to adopt, for the new Italian republic, a tricolor similar to the French one, green, white and red with horizontal bands. This flag was then solemnly inaugurated in Milan on 9 July 1797, and made official with a decree in May 1798 as the flag of the new state.

In the following fifty years the tricolor underwent various geometric changes, but over the years it became the only emblem of the feeling of Italian nationality until 1 August 1848, when the Italian tricolor flag, this time in vertical bands, was for the first time described in the Lieutenant decree n ° 753. Thus the national flag became the one desired by Charles Albert of Savoy: green, white and red tricolor, loaded with the Savoyard Samnite shield, surrounded by a blue band, in the center of the white band. 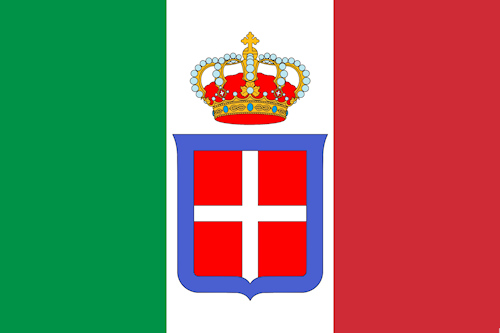 Here the peculiarities of the military naval flag are born. In fact, five months before the aforementioned decree, the flags of the warship were instead regulated by a royal license with the following expression:

"Our warships and the ships of our merchant navy will raise the Italian tricolor flag (green, white and red) with the Savoy shield in the center as a national flag. The shield will be surmounted by a warship crown".

It is unusual to observe that the military naval flag thus became the first tricolor flag of the kingdom to contain the royal crown, and also the only one until 1860. With the Royal Decree of 25 March 1860 the Flag of the nascent unitary state was definitively regulated, establishing that the civil flag, as well as that of the merchant navy, would have carried only the shield of Savoy; that of the Army the shield surmounted by the royal crown without the red touch (ie the red cloth inside the crown); that of the Navy, and of the Government itself, the shield surmounted by the royal crown with the red touch. On this basis, the Navy Flag can be considered the first official insignia of the Italian government. The coincidence between the two flags was justified by the fact that, within the Government, the same Ministry of the Navy had been detached from that of the War and aggregated to the Presidency of the Council of Ministers. It should also be noted that in public buildings in Italy, as well as in Italian legations abroad, the use of the Navy Flag with the red touch was widespread. The regulatory definition of these flags will remain essentially unchanged for eighty-seven years. 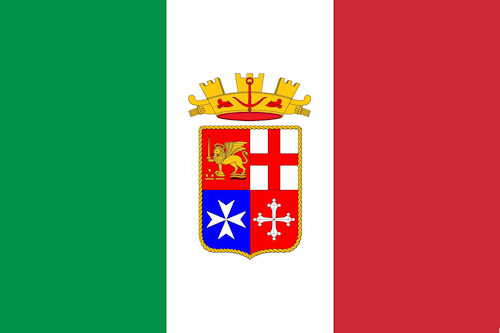 It is in fact necessary to arrive at 1947, when, following the changed shape of the State, the National Flag lost the Savoy shield in the center of the white stripe. The legislative decree of November 9th n. 1305, then instituted the new naval flags for the Merchant Navy and the Military Navy, describing them as follows:

"For the Navy. Military, the naval flag consists of the Italian tricolor, loaded, in the center of the white band, with the heraldic emblem of the Navy, representing in four parts the coats of arms of the Maritime Republics (Venice-Pisa-Genoa-Amalfi) and surmounted by a turreted and rostral crown.

For the Merchant Navy, the naval flag consists of the Italian tricolor, loaded, in the center of the white band, with the heraldic coat of arms indicated in the previous paragraph, without a turreted and rostral crown, and with the Lion of San Marco with a book, rather than a sword. "

The Italian tricolor and the naval flag of the Navy have not undergone substantial changes since then. It is important to note that the chromatic characteristics of the tricolor were definitively and unambiguously identified almost fifty years later in 2006 with a Decree of the President of the Council of Ministers: fern green (Pantone textile 17-6153 TCX), bright white (Pantone textile 11- 0601 TCX) and scarlet red (Pantone textile 18-1662 TCX). Finally, the last change concerns the heraldic coat of arms of the Navy. Since its establishment in 1947, although all the flags produced over time have traced common formal canons in graphics, it did not have a precise regulation to define the representative details, until 2012 when the Navy's Order Sheet n. 52 of 16 December 2012 defined renewed forms and details.

The XXV national meeting of the Italian Society of Underwater Medicine was held in Padua from 2 to 4 December and...
170
Read

Yesterday, at 12:00, in the suggestive Piazza d'Armi of the Aragonese Castle of Taranto, the...
373
Read