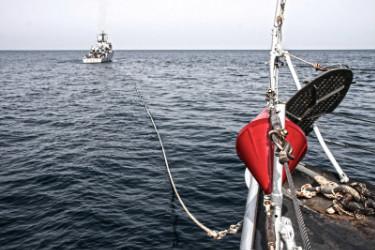 Leaving the port of Palermo, the February 17, the three corvettes of the Navy, Urania, Sphinx and Fenice, engaged in the Command School, continue the training at sea of ​​the 12 vessel lieutenants who, in a few months, will take their first Command .

The second week of the Tactical Internship was dedicated to towing maneuvers, one of the most delicate close-up maneuvers in the open sea that requires great preparation and coordination among the crews. One ship simulates being damaged and stops while the other approaches to take it in tow. The Navy uses two types of standard maneuvers, called "windward" and "downwind" according to the weather conditions and the type of ship to be rescued.

At the end of the approach, when the damaged ship is about 30 meters away, the knuckle launches the "Bag", a cable "ball", with an iron core, tied to a rope, which is thrown onto the ship in difficulty. Once the bag has been retrieved, the ship can pull the trailer cable on board, more than 200 meters of synthetic cable, together with steel clips and a chain that is secured to the bow while the other end is fixed to the stern hook of the towing ship.

During the three days of navigation, the ships of the Command School carried out more than 60 towing maneuvers, day and night, from windward and downwind, which saw the visitors concentrated in the various phases of the operation, under the guidance of the assessors. The three units are now heading towards Naples, where they will stop over the weekend.