Operation Atalanta, Libeccio ship returns to the base 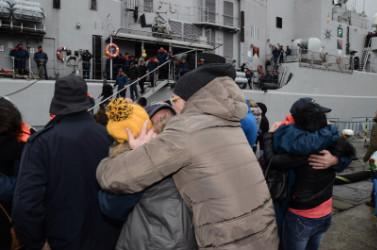 After 5 months of stay in the waters of the Horn of Africa and the Indian Ocean, engaged in the anti-piracy operation Atalanta, today the frigate Libeccio has returned to the naval base of La Spezia.

The ship, under the command of the frigate captain Stefano Calvetti, who started from La Spezia last October 6, with a crew of 238 sailors, between men and women, contributed to the fight against piracy, a phenomenon now in decline thanks to the surveillance and presence of military ships in the Gulf of Aden and in the Indian Ocean.

More than eight thousand merchants monitored and assisted, a rescue off the coast of Yemen, medical assistance provided to small boats near Somalia and also humanitarian support to one of the orphanages in Dar es Salaam in Tanzania. These are the activities carried out by the frigate of our Marina.

Waiting for the Libeccio on the dock, the families of our sailors, the commander in chief of the Naval Squad, Team Admiral Filippo Maria Foffi, the commander of the Second Italian Naval Group, rear-admiral Francesco Sollitto and the band of the maritime military department of the Upper Tyrrhenian directed by master 1, Lieutenant Marshal Lino Villella.