Home News armed forces Seaside Beyond 1000 migrants saved by the ships of ...

Over 1000 migrants rescued by Navy ships south of Lampedusa 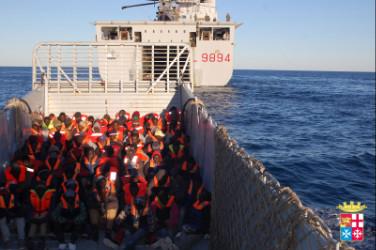 With the improvement in weather conditions, on Sunday 16 February, were identified by helicopters of the naval device of the Mare Nostrum operation, from 11.10 in the morning to the early hours of the afternoon, in an area between the 80 and the 100 miles to the south - east of Lampedusa, two barges loaded with migrants from the Libyan coasts.

On the first of these the frigate Espero and the amphibious ship San Giusto intervened. Having ascertained the scarce buoyancy, the surplus of people on board, all without safety equipment, the emergency situation was declared; thanks to the joint rescue action of the two Navy ships, around 1410 local time it was possible to recover on board Nave San Giusto all the 244 migrants of which 41 women and 11 minor.

On the second boat intervened ship Aliseo, assisted by a Stromboli ship, which after having declared the emergency situation, having ascertained the overcrowding and the precarious conditions of the boat, rescued and recovered on board all the migrants. 2 patrol boats of the Harbor Master's Office from Lampedusa were also involved in the rescue operations. The cooperation put in place led to the rescue of migrant 263, of which 30 women (two in an interesting state), minor 35 and a newborn.

The migrants rescued yesterday, 507 in total, are added to the 572 people already recovered and rescued between Friday and Saturday. In summary, in the last 72 hours, migrant units of the Navy participating in the Operation Mare Nostrum 1079 have been rescued by the Navy units, most of which, currently on board a San Giusto ship, will be landed at Augusta on the next 18 February.