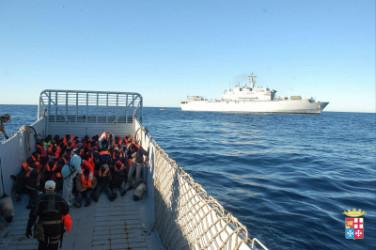 With the improvement of meteorological conditions, migratory flows from the southern shore of the Mediterranean to Italy have resumed massively. The Mare Nostrum humanitarian operation continues incessantly.

In the last week the aeronaval device deployed, including the San Giusto amphibious unit, the Espero and Aliseo frigates, the Stromboli team supplier, the Libra patrol helicopter component made up of EH101 and AB212, together with Aeronautica Militare staff and vehicles , Carabinieri, Guardia di Finanza, Coast Guard and all the State Corps, helped a total of 1085 migrants in the last weekend.

In the weekend that runs from Friday 14 to Sunday 16 February, in cooperation with the ships Aliseo, Espero and Libra, they were recovered altogether by San Giusto, 817 shipwrecked women including 66 women (3 in an interesting state) and smaller 125. amphibious vessel of the Navy has assisted survivors by providing food, water and medical care thanks to medical treatment thanks to the team of the Marina San Marco Brigade and the volunteer staff of the Francesca Rava Association.

Upon completion of the operation, the ship commander San Giusto succeeded, with the support of the embarked State Police team, in identifying a smuggler who, handed over to the judicial authority, is now in a state of arrest.

Upon arrival in the port of Augusta Ambassador Luis Chavez Basaigoitia, permanent representative of the International Organization for Immigration (IOM), accompanied by the commander of the Catania Maritime Directorate, Admiral Domenico De Michele, wanted to personally verify the conditions of good health and treatment reserved for migrants awaiting disembarkation. Having ascertained the work of the crew, he congratulated the captain of the vessel Mario Mattesi, commander of Nave San Giusto.

Once the landing activities were completed, the amphibious vessel resumed its 21 February activities, continuing operations in the area.