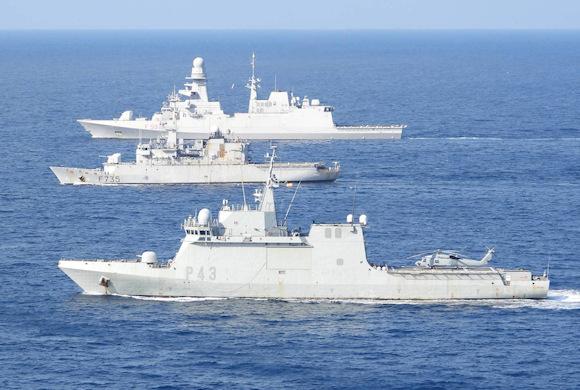 From 19 to 23 September 2022, as part of the "Operation Gabinia" aimed at preventing and combating the phenomenon of piracy, Nave Marceglia participated, in the waters of the Gulf of Guinea, in the Naval Exercise Maritime Operations (NEMO) under French guidance.

Through the coordinated patrol with the marinas of the riparian countries of the Architecture of Yaoundé, an interregional organization of central-western Africa set up to prevent and prosecute illegal activities in the waters of the Gulf of Guinea (Illegal, Unreported and Unregulated fishing), the Marine Nationale he was able to underline his commitment in this regard. As part of the NEMO exercise, the Navies of Ivory Coast, Ghana, Togo, Benin and Nigeria were able to cooperate, as well as with Nave Marceglia, also with the European naval units present in the area, such as the French frigate Germinal and the Spanish patrol Flash of lightning.

At the end of the exercise, the aforementioned naval units organized a PASSEX (Passing Exercise) during which the young officers on board underwent training in kinematic maneuvers. On this occasion, the flight crews of organic helicopters, Nave's SH-90 Marceglia and Nave's AS365 N Germinal, carried out a formation flight in the airspace above the naval deployment, at the end of which, Nave Flash of lightning guaranteed its own flight deck for take-off and landing activities.

The presence of different European units in the waters of the Gulf of Guinea falls within the scope of the activities aimed at Coordinated Maritime Presences (CMP), whose dual purpose is to increase the capacity of the European Union in guaranteeing the safety of navigation in the maritime areas of interest and to promote cooperation and international partnership at sea.

After the intense week of activity, Nave Marceglia continued navigation towards the port of Cotonou. At the end of the stop, the unit will resume the sea in the wake of the broader mission that sees the Navy ensure a constant presence and surveillance of national and international contexts, such as the Gulf of Guinea, an integral part of the broader concept of "Mediterranean Enlarged ".

Yesterday, at 12:00, in the suggestive Piazza d'Armi of the Aragonese Castle of Taranto, the...
344
Read