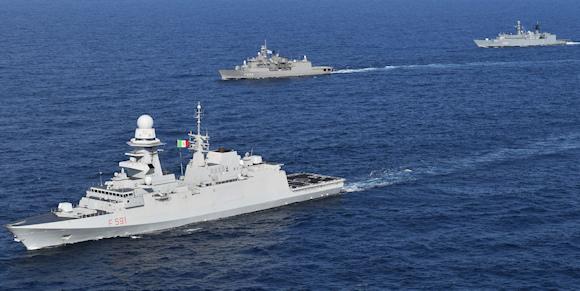 It ended for Nave Fasan participation in the air and naval exercise Niriis 21, organized by the Hellenic Navy and held on the waters around the island of Crete between 22 and 30 November 2021, according to a program of serial activities that embraced all forms of struggle, and a tactical phase developed in a scenario of crisis and of multidimensional and asymmetrical threat, focused on an evacuation of non-combatant personnel (NEO).

In this operational framework, the Standing Nato Maritime Group 2 (SNMG2) composed of Flagship, Ship Virginio Fasan (FREMM ASW - F591), the Romanian frigate Regina Maria, the Bulgarian frigate Drazki and the German supply Spessart, has operated with the assets of the Greek Navy and Air Force, as well as with the Permanent Group of Minehunters (SNMCMG2), consolidating interoperability between the Allied Forces, in order to increase operational readiness and strengthen cooperation between the participating multinational assets.

The exercise represented an opportunity for considerable professional growth for the ship's crew Fasan, receiving great appreciation even in the youngest: "I am very happy to have participated in the training activities with the NATO Maritime Forces. Conducting a series of hot shooting in the role of operator of the KBA 25/80 machine gun was an important experience to enrich my professional background", in the words of Deputy Chief Martina Bosco at the end of a hot shooting activity, one can see the satisfaction of having successfully completed a period of intense training at sea.

The regular participation of the NATO Permanent Rapid Reaction Naval Forces (NATO Response Force) in the main exercises of the Allied countries is essential to maintain high readiness, improve interoperability and strengthen cohesion, helping to show the presence and commitment of the NATO for maritime security and collective defense under the command of the Allied maritime component (MARCOM Northwood).

The XXV national meeting of the Italian Society of Underwater Medicine was held in Padua from 2 to 4 December and...
11
Read

Yesterday, at 12:00, in the suggestive Piazza d'Armi of the Aragonese Castle of Taranto, the...
16
Read

On Monday 5 December, with the award ceremony in the Piazza d'Armi of the Non-Commissioned Officers School of Taranto, it was...
9
Read

With the solemn act of Oath of Loyalty to the Republican Institutions last December 1st, at the Scuola...
281
Read

The handover ceremony of the command took place on 28 November 2022 at the naval base in Cagliari...
4481
Read

The third millennium has opened, as indeed already foreseen, with serious geopolitical crises whose effects have...
4675
Read