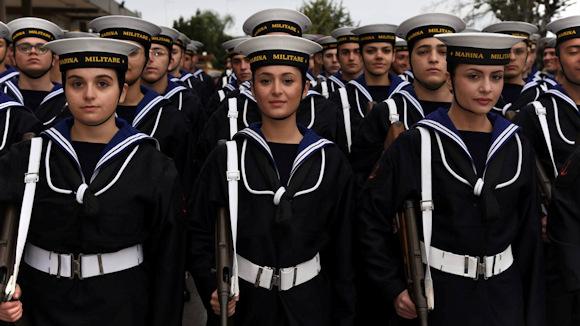 With the solemn act of Oath of Loyalty to the Republican Institutions last December 1st, at the Officers' School of Taranto, the 7th basic training course of the year 2022 of the volunteers in firm prefixed of one year (VFP1) belonging to the maritime military crews, which involved 303 young people from all over Italy.

In just four weeks full of educational, educational and training activities, the visitors followed a professionalizing path aimed at developing specific aptitudes, necessary to be effectively employed on board the units of the naval squadron. The deepening of the didactic programs alternated with the activities of ethical-military training, sports-seafaring, safety in the workplace, passing through formal training and closed order.

“…I approached the Navy by reading, in some magazines, about highly technological devices embarked on ships and submarines. I can't wait to operate on those devices alongside true sea professionals... I hope one day I can be an inspiration for other kids, like my father, an Army officer, of whom I am very proud was for me ." this is the comment of the com. 2nd cl. M/ETE-sr Giorgi Francesco. 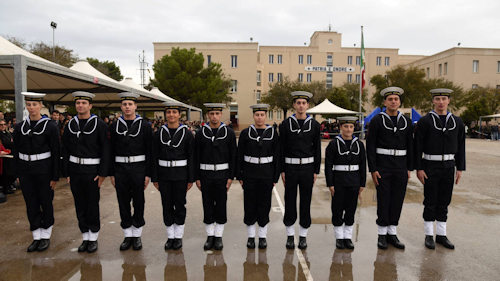 Together with the new sailors, 10 VFP4 athletes from the Navy sports group also swore allegiance to the Republic - young champions who have already distinguished themselves at a national level in disciplines such as swimming, canoeing, rowing, Canadian slalom and class 49 sailinger, but also target shooting, skeet shooting and archery - who have completed a short two-week course aimed at acquiring basic notions of a disciplinary, ethical and military nature.

“We are happy to have had this military experience - says the municipality of 1 ^ cl. Rosa Mathilde Serena, athlete of the National Team Canoe K1 and K2 – we emerge enriched and aware of what we and the Armed Forces represent for our country."

In a parade ground crowded with relatives and friends, the commander of Mariscuola Taranto, rear admiral Francesco Milazzo, during a passage of his address, addressed the parents of the young sailors thanking them for having entrusted the Navy with the most precious, underlined as "...my staff and I deeply feel the responsibility that we have assumed and that we will also pass on to the commanders who will receive your children at their destination, that of transforming good citizens into equally good soldiers and sailors."

At the end of the course, 58 volunteers will be sent to their destination on board the units of the Naval Squadron, 62 sailors destined for the "Caorle" Schools Battalion of the San Marco Marina Brigade to obtain the amphibious qualification, while the remaining 183 will begin a training period specialist at Mariscuola Taranto, for the categories "Kitchen and canteen master", "Installation defense service", "Electronic technician", "Fitter" and "Signaler", and at Mariscuola La Maddalena, for the categories "Nocchiere" and "Technician of machines".

On Friday 27 January, the visit of the Undersecretary of State for Defense Dr. Matteo Perego of Cremnago took place...
652
Read

After a sleep that lasted about half a million years, a paleontological find has come to light among the soil...
2923
Read

The offshore patrol vessel Commander Foscari, after having cast off the moorings from the Augusta Naval Base the days ...
573
Read

The Director of Naval Armaments (Navarm) of the General Secretariat of Defense and National Directorate of ...
4651
Read

After a night of voting in the House Budget Committee, an amendment was approved to the proposed...
4428
Read

With the end of the PIA - Pooling Implementing Arrangement - signed in 2018 by the Defense and the US Marine Corps and the...
13167
Read