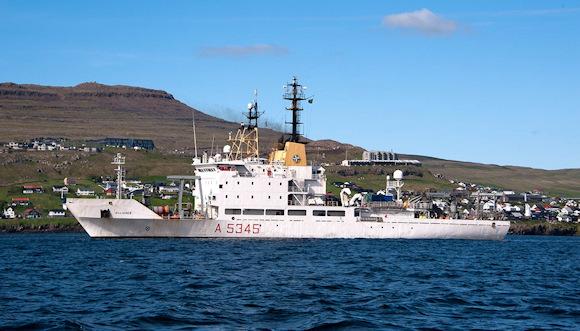 After participating in the international exercise REPMUS 22 in the Atlantic Ocean, the multi-purpose research vessel Alliance NATO, crewed by the Navy, departed on October 18 from the Norwegian port of Tromso with a science team from the US Navy's Office of Naval Research (ONR) for a new scientific research mission.

The campaign Northern Ocean Rapid Surface Evolution (NORSE) 22, organized with the Center for Maritime Research and Experimentation (CMRE) of NATO, will be carried out in the waters of the Norwegian Sea off the island of Jan Mayen.

NORSE 22 focuses on the characterization of ocean physical parameters associated with underwater acoustic propagation at high ice-free latitudes. The goal is to improve the predictive models of propagation, and to release an autonomous observation network composed of sensors and autonomous submerged vehicles to measure the sea currents and the characteristics that make up the various layers of the Arctic Ocean.

It started last September 5th from La Spezia, under the command of the frigate captain Federico Carleo, Nave Alliance can count on a crew of 44 military personnel to which, for the NORSE 22 mission, is added a research group consisting of 25 scientific researchers from the most important university research departments in the sector, coordinated by Dr. Megan Ballard of the University of Texas, responsible for the ONR scientific mission.

The XXV national meeting of the Italian Society of Underwater Medicine was held in Padua from 2 to 4 December and...
80
Read

Yesterday, at 12:00, in the suggestive Piazza d'Armi of the Aragonese Castle of Taranto, the...
87
Read

On Monday 5 December, with the award ceremony in the Piazza d'Armi of the Non-Commissioned Officers School of Taranto, it was...
33
Read

With the solemn act of Oath of Loyalty to the Republican Institutions last December 1st, at the Scuola...
297
Read

The handover ceremony of the command took place on 28 November 2022 at the naval base in Cagliari...
4510
Read

The third millennium has opened, as indeed already foreseen, with serious geopolitical crises whose effects have...
4695
Read

The Chief of Staff of the Navy, Admiral Enrico Credendino met on November 21 ...
424
Read