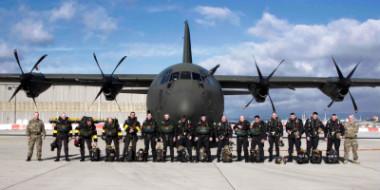 In the bay of Gibraltar (UK), from the 17 to the February 21, an international exercise was held, organized by the Royal Navy, which was attended by a rate of operators from the SPA (Submarine Parachute Assistance Group) of the Underwater Operative Group ( GOS) by COMSUBIN.

This activity is carried out annually to maintain the high level of collaboration and training that has been acquired between the SPA teams of the two countries.

The Nucleo SPAG, employed by the Comsubin Diving Operative Group, consists of diver, submariner, doctor and nurse in possession of a military paratrooper patent; the tasks assigned to it are those of establishing a first contact with a possible submarine in difficulty and providing assistance to the crew.

Thanks to a high degree of operational readiness, the nucleus is able to reach, with very short notice, by helicopter or plane, the area where the submarine in difficulty was identified to establish the first communications and report the conditions to the operating room of the Navy. Moreover, if the conditions exist for the individual escape of the crew of the submarine, the GOS staff is able to welcome him in the rescue 'village' composed of self-inflating rafts and to provide him with medical assistance. The objective of the exercise was to to deepen the training of the teams, consolidate their integration and, as regards the men of the GOS, acquire the knowledge of the procedures of the RAF (Royal Air Force) for the offshore launching. Therefore, in a relatively short period a considerable number of launches was carried out both in the night period and in marine weather conditions at the allowed limit, similar to what happened in Italy during the edition of the 2013 exercise that saw British operators training in Italian aviation procedures.

The SMASHEX 14 exercise was an important training opportunity that allowed the staff of the SPA Team of the COMSUBIN Diving Operative Group to strengthen the already high and profitable level of cooperation in a highly specialized field aimed at safeguarding human life at sea .