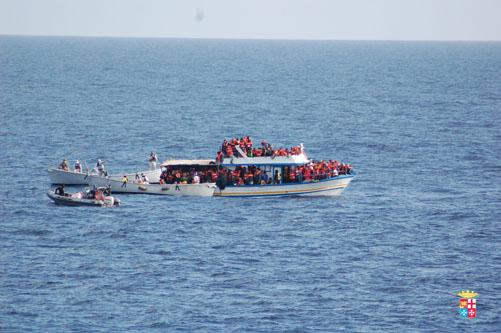 Yesterday evening another boat with 202 migrants was rescued by the Zeffiro ship. At first the boat was located by an EH101 helicopter of the San Marco amphibious ship which forwarded the position to the nearest Navy frigate to provide relief.

The commander of ship Zeffiro, after having reached the position of the migrants, found the supernumerary of people on board, almost all without safety equipment, declared the emergency situation.

Yesterday evening 202 migrants were transhipped on the Zeffiro ship which, according to the first statements released, appear to be from Pakistan, Nigeria, Morocco, Palestine, Liberia, Cameroon, Syria, Yemen and Tunisia. Among them 157 men, 16 women (of which three pregnant) and 29 children.

Today the migrants will be transferred to the San Marco ship and then transported to the port of Augusta. During the transit, the Frontier Police present on board the amphibious ship will begin the activities of gathering information, pre-identification and photo reporting of all the migrants rescued at sea.

In addition, another vessel located on the same day yesterday, on the orders of the General Command of the Port Authorities, was rescued by a merchant unit in transit which took on board 97 people, including 23 women, and will be disembarked in the port of Pozzallo in the evening today.

Nave San Marco on Saturday 11 January rescued another 236 migrants including 28 women (two pregnant) and 57 minors who had already landed at the port of Augusta from the Libra ship.

The XXV national meeting of the Italian Society of Underwater Medicine was held in Padua from 2 to 4 December and...
169
Read

Yesterday, at 12:00, in the suggestive Piazza d'Armi of the Aragonese Castle of Taranto, the...
367
Read