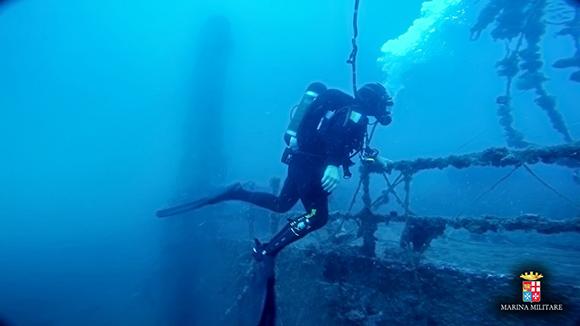 After inspection of the submarine Millo at a depth of 70 meters, the Comsubin unit, in transit to return to the Tyrrhenian Sea, stopped in the waters of Saline Ioniche (RC) on the vertical wreck of the "Laura Cosulich" motor ship.

Once again the Navy divers dived to over 50 meters to check the state of the hull access closures, put in place last year with an important underwater operation lasting 67 hours.

On July 3, 1941 the motor ship "Laura Cosulich", now known as "Laura C", was torpedoed by the British submarine "Upholder" in the waters in front of the Ionian Saline while it was headed for Africa to supply the Italian troops.

The ship immediately settled on the sandy bottom and then gradually slipped in depth, also due to the 5.000 tons of goods it was carrying, including a large quantity of TNT.

To avoid the procurement of explosives from organized crime, many interventions were carried out over time, including that of cementing the inside of the holds.

In November 2015 the Diving Operations Group (GOS) of the Navy installed barriers at the access gates to the holds of the wreck of the ship "Laura C", to prevent entry to the last area inside the hull in which explosive artifacts were still present.

Yesterday, 25 June 2022, the Luigi Rizzo frigate returned to La Spezia at the end of its operational commitment in the ...
289
Read

On June 17, 2022, the salutation of the brigade took place at the forecourt of the E. Carlotto barracks in Brindisi ...
496
Read

Do you swear it? I swear!!! After more than two and a half years, the majestic scream of the VFP1 students of Mariscuola La Maddalena ...
351
Read

The multinational exercise ADRION 10 ended on Friday 22 June, after six days of activity. Among the navies ...
553
Read

On the evening of Tuesday 7 June, the Palinuro School ship set sail from the Military Arsenal of La Spezia to give ...
415
Read

Exactly four months after the start of production on 11 January, at the factory ...
42861
Read