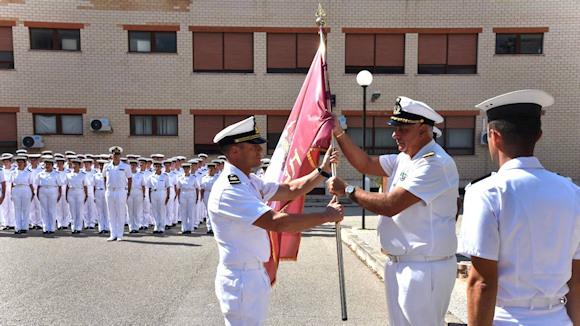 Hector, is the name of the 22nd Marshals' normal course of the Non-commissioned Officers School of Taranto which on 21 September, at the end of the training process, delivered its amaranth-colored flag to the Institute, as a tangible reminder of its presence in the Training Institute and as an example for subsequent classes.

The ceremony took place in the historic square of the marshals area course management, in the presence of the second-in-command of the NCO School, ship captain Giorgio Gentile. As per tradition, the foreman, in front of the pupils brigade deployed, entrusted the flag to the brigadier of the course management to place it, next to those of the previous courses, in the Garibaldi atrium of the Domenico Millelire building.

The military and academic training course, which began in September 2019, ended despite the complex pandemic emergency undermining the training course. The multiple limitations related to Covid-19 did not actually prevent students from completing the work started with commitment and vigor, fully identifying with the motto of the course: And Vulneribus Animus Egreditur, "Courage is born from wounds." An incitement not to give up and to persevere with tenacity and a spirit of sacrifice, essential elements for those who have chosen to dedicate their lives to the defense and security of the country, on the sea and from sea.

The 22nd NMRS chose the hero of Greek mythology, Hector, as the name of the course. A man of great values, a symbol of ardor and honor, who, armed with willpower and courage, fights against supernatural forces relying only on himself. The Trojan Hero, defeated but unconquered, is a source of inspiration for all the young non-commissioned officers who will soon reach their first destination. In fact, with the symbolic gesture of handing over the flag of the course, the training of the new marshals was concluded.

Yesterday, at 12:00, in the suggestive Piazza d'Armi of the Aragonese Castle of Taranto, the...
366
Read

With the solemn act of Oath of Loyalty to the Republican Institutions last December 1st, at the Scuola...
361
Read