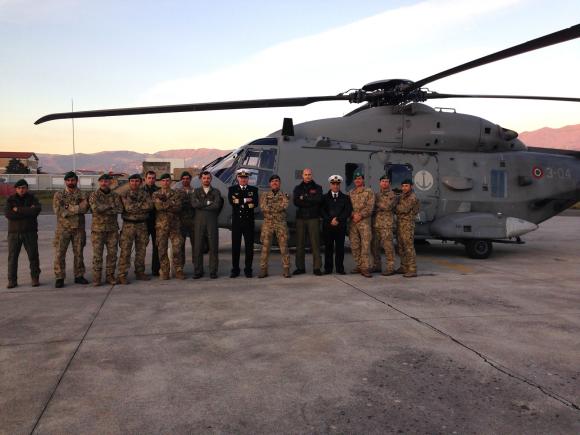 The entry into operation of the new SH-90 helicopter was a leap forward for the Navy's Air Force, which can boast, after the EH-101, a new ultra-modern helicopter, one of the best performing in its category.

Among the various operational capabilities ensured by the modern helicopter, a few days ago the Navy, one of the first Armed Forces in the world to have the SH-90 in line, can also include the launch of paratroopers with the free fall technique.

This result returns to the Incursori Operating Group (GOI) of COMSUBIN a fundamental option of concealed insertion in multiple operational needs. The objective was achieved thanks to a coordination work between COMFORAER and COMSUBIN, which made it possible to "burn the steps", normally very long and complex, necessary to obtain the certification of the helicopter's capacity to carry out this type of activity.

The last act of this certification process took place through a stage of launches carried out by the GOI parachuting instructors and by the pilots of the 5th Helicopter Group, at the Luni Helicopters Station.

In particular, five GOI paratroopers - the COMSUBIN commander himself, Rear Admiral Chionna, the Turkish lieutenant, the lieutenant Maccioni, the lieutenant Sguerrini and the lieutenant Parrella - all with several hundred launches to their credit, flown by the frigate captain Terbio and by Lieutenant Battaglia, over an intense day of tests, they carried out a large series of launches that allowed:

to verify compliance with all safety parameters in the most diverse launch conditions;
to establish the most suitable kinematic conditions and executive methods for the release of paratroopers;
to declare the helicopter definitely suitable for launching also for all other GOI operators.

The event was followed "live", with enthusiasm and interest, by a lot of Luni's staff and by the Commander of the base, Captain Dell'Alba who, at the end of the activity, wanted to duly celebrate the event with everyone the protagonists of this important activity.

Yesterday, at 12:00, in the suggestive Piazza d'Armi of the Aragonese Castle of Taranto, the...
353
Read