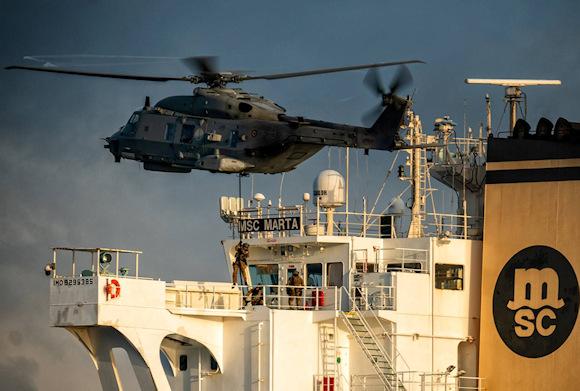 On 22 October 2022 in the Gulf of Guinea, twenty miles off the coast of Ghana, a training activity was carried out which involved Nave Antonio Marceglia, engaged in the “Gabinia” operation of presence and surveillance to protect the maritime cluster, and the Motor Vessel MSC Martha of the Mediterranean Shipping Company SA, affiliated with Assarmatori, the trade association of the shipping sector.

The exercise to combat piracy was started through the alarm given by the imposing door contaier, which reported the presence of a small boat with armed personnel on board proceeding at high speed and with threatening kinematics. The Italian frigate, following the reception of the activation, headed towards the action scene launching the SH-90 organic helicopter in flight in order to be able to carry out a Surface Picture through the use of Shooters Amphibians (TSA). Once verified the absence of any suspicious targets near the freighter, the device opposed of the marine brigade Saint Mark carried out the intervention to implement the procedures Visit Boarding Search and Seizure (VBSS).

Il Boarding Team of the Navy fusiliers specifically implemented the infiltration by means of a beard, making a descent on the left wing of the Plank of the MSC Martha, a platform with a size of a few square meters, from a height of about 20 meters. The same, following the reclamation, were recovered aboard the SH-90; this phase turns out to be very delicate as the rotary wing attitude had to maintain the hover position for several minutes at a close distance from the bridge of the freighter.

The exercise made it possible to put into practice both the simulated activation of the alarm chain of the MSC Martha and the implementation of the procedures of Ship Security Plan, and the prompt reaction of the Navy unit in reaching the scene of action and deploying specialist teams to secure the freighter.

The training activity testifies not only to the high level of synergy consolidated between the Armed Force and the National Armory, but also to the importance of guaranteeing the presence of a naval unit in a context, the Gulf of Guinea, of significant importance. for the protection of national interests.

The XXV national meeting of the Italian Society of Underwater Medicine was held in Padua from 2 to 4 December and...
71
Read

Yesterday, at 12:00, in the suggestive Piazza d'Armi of the Aragonese Castle of Taranto, the...
78
Read

On Monday 5 December, with the award ceremony in the Piazza d'Armi of the Non-Commissioned Officers School of Taranto, it was...
30
Read

With the solemn act of Oath of Loyalty to the Republican Institutions last December 1st, at the Scuola...
293
Read

The handover ceremony of the command took place on 28 November 2022 at the naval base in Cagliari...
4505
Read

The third millennium has opened, as indeed already foreseen, with serious geopolitical crises whose effects have...
4690
Read

The Chief of Staff of the Navy, Admiral Enrico Credendino met on November 21 ...
422
Read