Mediterranean Sea. The exercise started on May 3 Open Sea 22 (MA22), the largest training event of the Italian Navy. Over the next three weeks, more than 4.000 women and men from 7 NATO nations and over 65 ships, submarines, aircraft and helicopters, will operate between the Adriatic, the Ionian, the Tyrrhenian and the Strait of Sicily, developing activities that will also affect the surrounding maritime territories thanks to the projection capabilities on land expressed by the amphibious component embarked. Several aircraft of the Italian Air Force also take part in the exercise, including fighters Euro Fighter, F35B STOVL which will operate from Nave Cavour and command and control assets CAEW G550 and for refueling in flight KC-767A.

The activity, directed by the command in chief of the naval team embarked on a ship Cavour, will involve the staff of the marine brigade Saint Mark and those of the various naval divisions into which the operational organization of the Navy is divided.

The forces in the field will be exercised in the maritime domain, whose connotations are also developed in the air and land contexts, and in the innovative ones of space and cyber-security, simulating high intensity and rapidly changing scenarios through which to verify the intervention capacities. in various areas, from the prevention and contrast of illicit trafficking, to the fight against conventional and asymmetrical threats, according to a realistic scenario with an approach centered on the concept of Multi-Domain Operations (MDO) and exploring new combinations of use of the assigned forces. Among these theExpeditionary Advanced Base Operations (EABO), under study in the US Navy, to extend the range of action of maritime forces and thus control strategic sea zones. 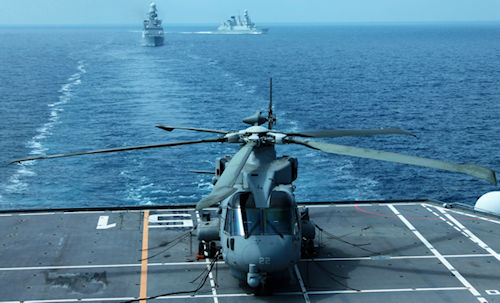 The strong "projection connotation" of the exercise will be supported by the presence of a landing force made up of over 350 riflemen from the marine brigade Saint Mark integrated by a company of lagoons of the Italian Army and two of the landing force of the Spanish Navy.

Students and accompanying teachers are integrated into the staff embarked on the units of the naval team and, depending on their course of study, will engage in various roles, including those of political advisor, legal advisor and public information officer, as well as being able to compare themselves with damage prevention and control systems, propulsion and elements of naval architecture with a high level of technology.

In the broader framework of strengthening ties with the national maritime cluster, the Confederation of Shipowners (Confitarma), the Center for Geopolitics and Maritime Strategy (CESMAR), the Voluntary Nurses of the Italian Red Cross and belonging to the Sovereign will also take part in the exercise. Order of Malta.

The main objectives of the exercise also include the continuation of the capacity development campaign of the new 5th generation F-35 B aircraft, preparatory to achieving the Initial Operational Capability (IOC) in 2024, and of the integration process with the other Armed Forces and with the foreign Navies.

The exercise will end next May 27.

On June 17, 2022, the salutation of the brigade took place at the forecourt of the E. Carlotto barracks in Brindisi ...
454
Read

Exactly four months after the start of production on 11 January, at the factory ...
42835
Read