Home News armed forces Best beaches In Brindisi, the Day of Remembrance of the ...

In Brindisi, the Day of Remembrance of the sailors who disappeared at sea 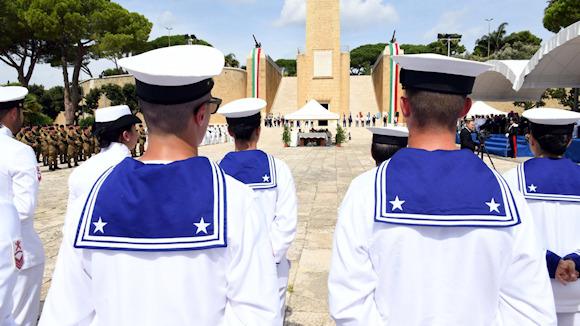 On 9 September, the Navy remembers, as every year, the "Day of Remembrance of the sailors who disappeared at sea" in front of the national monument "Sailor of Italy" in Brindisi.

The ceremony, presided over by the Undersecretary of State for Defense, Stefania Pucciarelli, accompanied by the Deputy Chief of Staff, Team Admiral Giuseppe Berutti Bergotto, saw the presence of civil, military and religious authorities together with weapon associations and representatives of the League Naval of Brindisi and the Italian Red Cross.

Senator Pucciarelli, during his speech, wanted "To honor the millennial seafaring and seafaring tradition to keep alive the memory of those who sacrificed their existence in the name of an ideal of service to the homeland or found death in the context of a work commitment linked to the sea". In expressing all my heartfelt and profound thanks to the Navy Summit and to all its personnel, military and civilian, of every rank, role, body, function and level of responsibility, and to their families, "I take the opportunity of these commemorations to express a deep sense of gratitude to all the Sailors, who with self-denial, a spirit of sacrifice and a sense of duty have not shirked their responsibilities in a two-year period characterized by epochal events ..." then concluded the undersecretary. 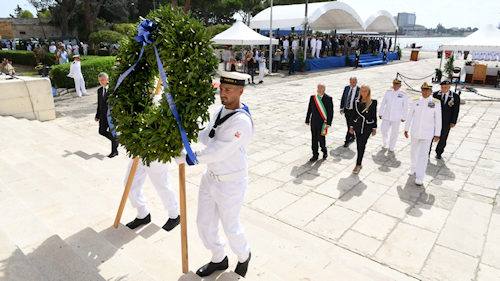 "To those sailors and the eternal shrines located at the bottom of the sea, we hug in a moving memory, we look at them with the affection of belonging to the great seafaring community, renewing our commitment to honor their memory with our loyalty and our service to the homeland, to ensure the safeguarding of national interests for the benefit of our country and of us all " the words of the Deputy Chief of Staff.

The commemoration has reached its 79th anniversary and is considered a civil solemnity, in perennial remembrance of the sailors, military and civilians, who sacrificed their lives in the service of their homeland, making the sea their shrine.

The monument, inaugurated on November 4, 1933 and erected on the initiative of the Italian Naval League, was built to commemorate those who died at sea in the service of the Fatherland and preserves in the shrine crypt, located at the base, the black marble slabs with the 6850 names of the sailors of the war and merchant navy who died in service starting from 1860. The choice of erecting it in the city of Brindisi was taken in light of the central role that the Salento city had during the Great War, a role sealed by the conferment, in the October 1919, of the decoration of the War Cross by Admiral Paolo Thaon di Revel.

An important date full of historical significance, 9 September is the anniversary of the sinking of the battleship Roma and of the destroyers Vivaldi e From Noli occurred after the armistice and during which more than 1700 sailors lost their lives.

The module "Arte del Comando" ended on September 20 for the students of the 23rd Marshals Normal Course "Zeus" ...
15
Read