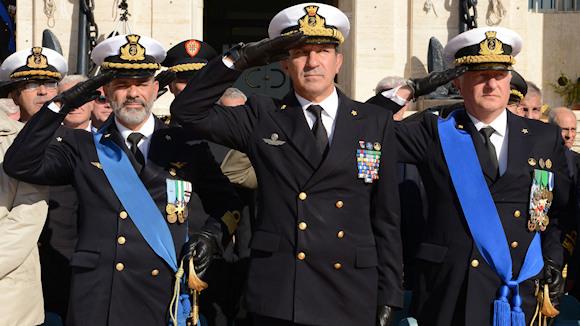 On November 28, 2022, the handover ceremony of the autonomous maritime command west - MARINA WEST.

In the presence of the Deputy Chief of Staff of the Navy, Admiral Giuseppe Berutti Bergotto, the vessel captain Domenico Usai handed over the command to Rear Admiral Enrico Pacioni.

In the square in front of the Admiralty, the regional and city authorities were present and with their presence they testified to the closeness of the institutions and the territory to the large family of the Navy on the island.

In front of the military and civilian personnel of MARINA OVEST, the owners of the commands and bodies of the MM in Sardinia, a large representation of the ANMI, the combat and weapon associations and the union representatives, the commander Usai recited the traditional formula of acknowledgment that sanctioned the transfer of command to Rear Admiral Pacioni.

This significant ceremony takes place about three months after the important regulatory reorganization that the Navy has completed, reconfiguring the Navy Logistic Support Command of Cagliari in West Autonomous Maritime Command.

During his speech, Commander Usai wanted to underline "the complexity of the last year spent in command of the MM logistic support command of Cagliari before and, since last September 1st, of the autonomous maritime command west", addressing a tangible sign of his recognition to the command staff for what has been done: "I would like each of you, women and men of Marina West, to receive my convinced and sincere thanks for the enormous effort you have made and for the flattering results obtained with the scarce resources available, THANK YOU ALL…!"

Admiral Pacioni, in his inauguration speech, stigmatized his attachment to Sardinia which "he gave a lot with his proud, austere, hard-working people and with a great sense of honor and sacrifice".

The importance of this land for the Navy - the admiral recalled - has its roots in history. In 1860 the Armed Force was born, in fact, from the merger of the Sardinian-Piedmontese and Bourbon navies. An importance that reaches up to the present day where Sardinia plays a leading role "at the center of the Mediterranean as an extremely important strategic asset in order to ensure the surveillance of the mare nostrum."

"In light of the current and future geostrategic framework, Sardinia plays an important role for the Navy." Thus the deputy chief of staff of the Navy wanted to frame the importance of "Cagliari base with the presence of the patrol and logistic support units, of the commands and logistic-administrative bodies and of the military and civilian personnel who work there". The operational support base of Cagliari - continued Admiral Berutti Bergotto -, due to its peculiar geographical location, it represents practically immediate access to the main maritime communication lines which, through the Strait of Sicily, connect Gibraltar to the Suez Canal and vice versa, as well as an essential outpost for monitoring the marine environment and maritime in the EEZ being established.